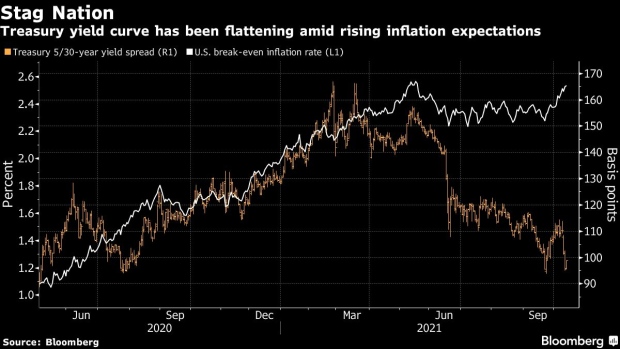 The yield premium 30-year bonds offer over 5-year equivalents fell toward a 17-month low this week, as U.S. consumer prices once again outpaced forecasts. Now around 100 basis points, the flattening has accelerated since June when Fed officials signaled two rate hikes by the end of 2023.

Investors are worried price rises will prove more sustained than officials expect, forcing policy makers to accelerate interest-rate hikes and thereby pressure the economic recovery. Money-market traders briefly brought forward expectations for the first Fed rate hike to September next year after the CPI data, before easing back to betting on a November lift-off.

“Inflationary pressures are expected to remain in place for a while, so concern will grow over Fed policy tightening,” Naokazu Koshimizu, a senior rates strategist at Nomura Securities Co. in Tokyo, wrote in a note. “Policy tightening will offset various factors that contribute to economic recovery.”

While the yield gap is narrowing, bond markets remain under pressure, creating a situation known as bear flattening. The 30-year yield has risen 20 basis points over the last month, while the 10-year is up by 27 basis points.

“We remain in the bear-flattening camp over the coming quarters noting that this phenomenon tends to play out ahead of Fed hikes,” wrote DBS Group strategist Eugene Leow in a note Thursday. “We think that the market has looked past taper and is now looking at the upcoming hike cycle.”

Asset Management One’s Takei said he’s overweight 30-year Treasuries and underweight five-year notes, saying the spread between the two could narrow to as little as zero before the end of 2022.

“There is a good chance that the U.S. will enter recession” in the coming year, he said. “The curve is still too steep.”