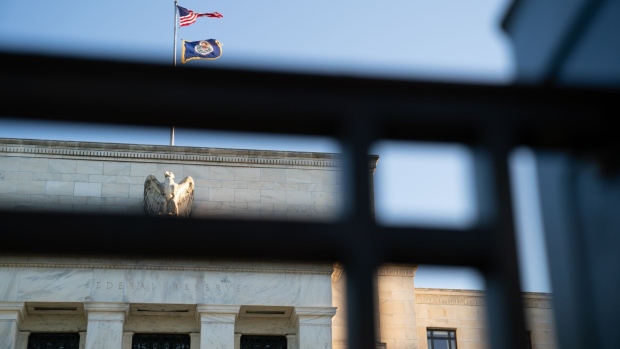 The Marriner S. Eccles Federal Reserve building stands behind a fence in Washington, D.C., U.S., on Tuesday, Aug. 18, 2020. In addition to helping rescue the U.S. economy amid the coronavirus pandemic, Fed Chair Jerome Powell and colleagues also spent 2020 finishing up the central bank’s first-ever review of how it pursues the goals of maximum employment and price stability set for it by Congress. Photographer: Erin Scott/Bloomberg , Bloomberg

Bond traders ramped up bets on faster growth and inflation after Federal Reserve officials reiterated projections that they’ll hold rates near zero through 2023.

The signal of continued ultra-loose policy drove the Treasuries yield curve sharply steeper, with 30-year yields breaking above 2.5 per cent for the first time since 2019. The premium over five-year debt was within touching distance of the highest level in nearly seven years.

Market measures of inflation expectations also surged to multiyear highs, while traders edged away from bets the Fed would start tightening as soon as late next year. The dollar pushed higher against its major peers.

Those moves came after Fed Chair Jerome Powell again indicated he wasn’t concerned over the recent surge in long-term yields -- with his focus still on whether financial conditions remained accommodative.

The Fed will allow an inflation overshoot, which “will keep the curve steepening as investors pencil in higher inflation risk premium, which should put upward pressure on the long-end of the curve,” said Gennadiy Goldberg, senior U.S. rates strategist at TD Securities.

Yields on 10-year Treasuries climbed another eight basis points to 1.72 per cent on Thursday, adding to the gains yesterday. In shorter maturities, they were largely steady as the Fed’s signals led traders to slightly scale back wagers on tightening as soon as late 2022. European bonds followed suit, with Germany’s 30-year bond yield climbing to the highest level since January 2020.

Seven of 18 Fed officials predicted higher rates by the end of 2023, compared with 5 of 17 at the December meeting, according to the latest Federal Open Market Committee quarterly economic projections. Still that left the median forecast unchanged at zero rates through 2023.

Powell made it clear today we shouldn’t expect action earlier than already indicated. He said it took 7 years after the GFC before the Fed tightened, telegraphing that existing guidance may be too hawkish.

“We’re not going to act pre-emptively based on forecasts,” Powell told reporters virtually following the decision, adding that it’ll take time to convince people that they’re willing to stick to that.

The Fed expects that a bump in inflation this year will be short-lived. Officials saw their preferred measure of price pressures slowing to 2 per cent next year following a spike to 2.4 per cent in 2021, according to the projections.

There was another element that may have been pressuring long-maturity yields higher. Powell stayed silent at his press briefing over whether the Fed will agree to banks’ request to extend a capital break that helped calm the Treasury market last year but is set to expire this month. He said there will be an announcement on that “in coming days.”

Still, the Fed’s decision Wednesday to increase the size of the counterparty limit for its overnight reverse repo facility led some traders to speculate the Fed won’t extend the break.

“The overall tone from the Fed leaves the back end of the curve largely unprotected,” wrote ING Groep NV strategists led by Padhraic Garvey. There is “no real barrier to a test higher in the 10-year yield in the coming weeks.”

--With assistance from Craig Torres, Edward Bolingbroke and Stephen Spratt.