How to Take Advantage of Market Volatility

The U.S. yield curve is flirting with another broad-based inversion again, reigniting Wall Street fears over the fate of the American economy.

A growing chorus of voices is being swayed by another notion: The signal might say more about the state of the world than the U.S. business cycle.

Treasuries now make up more than half of all global haven assets, double the share they accounted for during the financial crisis, according to Eurizon SLJ Capital. That complicates matters when long- and short-term yields flip: What used to be a reliable American recession indicator is instead an barometer of investors diving for cover worldwide.

It’s a narrative that makes a lot of sense as the threat from the coronavirus continues to grow, and it revives the frantic debate from last year about how much predictive power the curve actually has left.

“In a grab for safety and duration, everyone is going for U.S. Treasuries,” said Gregory Faranello, the head of U.S. rates at AmeriVet Securities. “The yield curve inversion is a signal now of global growth issues, and not really reflecting what is going on in the U.S.”

After a respite early last week the curve is once again flattening, and the gap between the rate on 10-year and three-month Treasuries narrowed for a third day on Monday. At the height of coronavirus angst and an equity sell-off at the end of last month it briefly inverted for the first time since October. 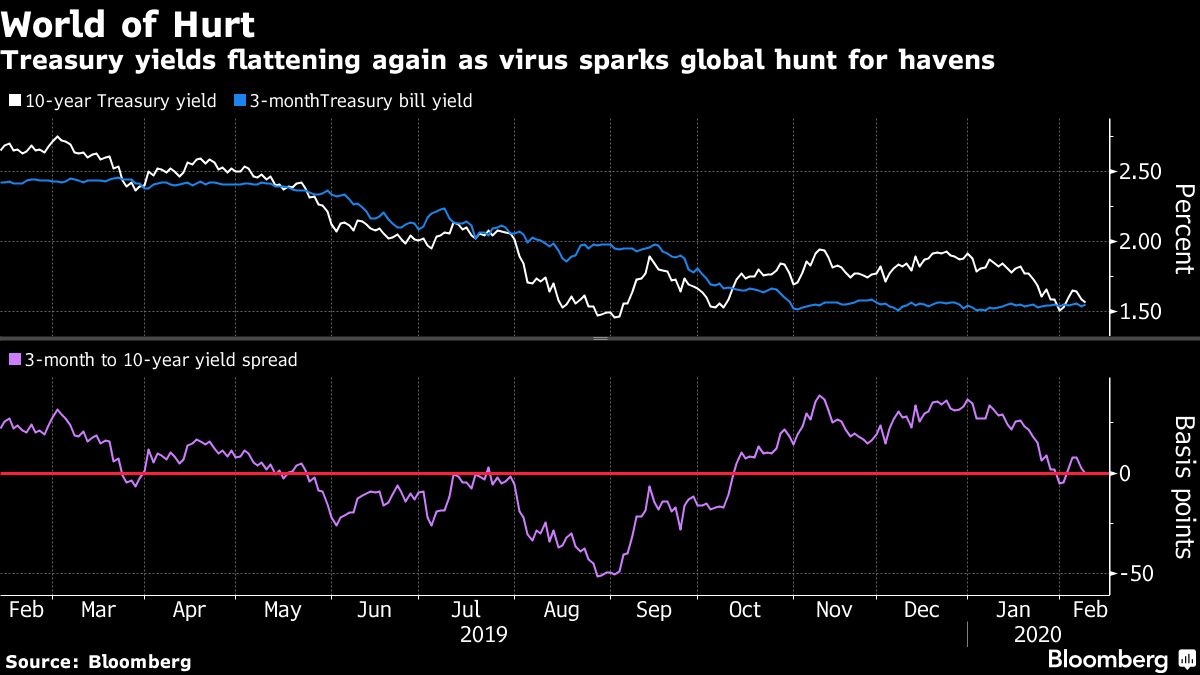 Bond yields typically rise alongside the duration of debt because they provide compensation for the effects of inflation. If rates on a 10-year note are lower than a three-month bill it suggests investors have a pessimistic view of growth and inflation a decade from now.

He predicts that by 2022, U.S. government debt will account for two-thirds of the world’s pool of haven bonds thanks to large issuance and quantitative easing by other central banks. His calculations are based on the outstanding amount of government debt in the U.S., Japan, and the three largest European economies, subtracting out the portion that is owned by central banks.

“The U.S. might, perversely, thrive because of troubles elsewhere,” Jen said in an interview. “When U.S. Treasury yields fall due to shocks outside of the U.S. that may or may not have an impact on the U.S. economy, it often provides added stimulus.”

It’s a view Federal Reserve officials are playing close attention to as global risks from the virus mount. In an interview with Bloomberg TV on Friday, Fed Vice Chairman Richard Clarida played down the inversion and said the negative spread is “really driven not so much by an outlook for the U.S. economy, but globally.” When there’s uncertainty money flows to America, he said, so current yield moves don’t reflect the U.S. outlook.

Campbell Harvey is credited with drawing the link between the slope of the yield curve and economic growth. The professor at Duke University’s Fuqua School of Business says corporate America is much more attuned to the yield curve signal and will take preventative action.

“CFOs and CEOs are more aware and aren’t likely to take on the risk of just ignoring it,” Harvey said. “They are being a little more cautious now.”

The gap between the yield on three-month and 10-year Treasuries recently slipped to as low as about minus 6 basis points. The spread -- which has inverted before each of the past seven U.S. recessions -- had initially fallen below zero in March 2019 as economic conditions deteriorated at the height of the trade war. The spread between two- and 10-year yields, which was negative as recently as September, remains above that mark at about 18 basis points.

On Wall Street, strategists at JPMorgan Chase & Co. still see plenty of reason to fret the slope of the curve. Their favorite indicator -- and a part of the curve that remains inverted -- is the gap between two-year forward and one-year forward rates, which can shed light on the bond market’s expectations of what the Fed will do.

In this case, it shows a “rising probability of a more protracted Fed rate cut cycle extending to 2021,” said Nikolaos Panigirtzoglou, a strategist at JPMorgan.

For now, there aren’t many other alarm bells in an American economy boasting the lowest unemployment rate in 50 years and buoyant stocks. While economists forecast a slowdown to 1.8% compared with 2.3 per cent in 2019, the U.S. is still enjoying the longest stretch without a recession since World War II. It remains unclear to what extent the country will be hit by a coronavirus-induced slowdown in China or elsewhere.

“When Treasuries become most dominant, investors from anywhere in the world naturally buy of lot of these bonds when they want a safe haven.” said Jen. “The yield curve in the U.S. is increasingly reflecting the fears of the rest of the world.”

--With assistance from David Westin.