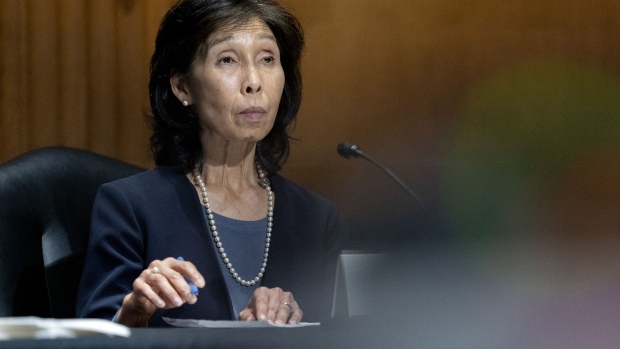 Nellie Liang, under secretary of the U.S. Treasury nominee for U.S. Joe Biden, listens during a Senate Finance Committee confirmation hearing in Washington, D.C., U.S., on Tuesday, May 25, 2021. The Treasury last week called for a global minimum corporate tax of at least 15%, less than the 21% rate it has proposed for the overseas earnings of U.S. businesses, a level that some nations had argued was excessive. , Bloomberg

“This is an urgent issue given the rapid growth of this market,” she told Bloomberg in an interview ahead of Tuesday’s House Financial Services Committee hearing on the stablecoin report released by the President’s Working Group on Financial Markets last year. She noted in her written testimony for the hearing that the market value for stablecoins has exploded to about $175 billion from roughly $5 billion at the start of 2020.

“We hurt both innovation and we increase risks if legislation is not passed,” Liang said in the interview.

Treasury has been in touch with congressional offices and a number are working on stablecoin proposals, according to Liang. Senator Pat Toomey of Pennsylvania, the top Republican on the Senate Banking Committee, has released a blueprint for future legislation. But it’s unclear if Republicans, like Toomey, and Democrats will be able to find enough common ground to advance a bill anytime soon.

The PWG’s stablecoin report noted that the burgeoning asset class has the potential to make payments cheaper and faster, but it also highlighted a number of potential risks, including runs on stablecoin issuers if investors lose confidence in the asset. Stablecoins are a form of digital currency typically pegged to the U.S. dollar or other fiat currency.

Regulators currently don’t have the authority to address all of the risks posed by stablecoins so Congress needs to step in to close the “regulatory gaps,” Liang said. The PWG report offered a number of recommendations, including that lawmakers pass legislation to subject coin issuers to bank-like rules by requiring them to be insured depository institutions.

The stablecoin report, which was compiled by Treasury and other key U.S. financial regulators, is part of a broader government effort to regulate digital assets, Liang said, adding that she anticipates the White House will offer more details on an administration-wide strategy in a few weeks.

Bloomberg previously broke the news that the Biden administration is preparing to take a more central role in overseeing digital assets, aiming to release an executive order as soon as this month.

That broader effort will expand beyond financial stability--a main focus of the stablecoin report--to examine issues such as the use of digital assets in illicit finance, financial inclusion, and the importance of U.S. leadership in the global financial system, Liang said.