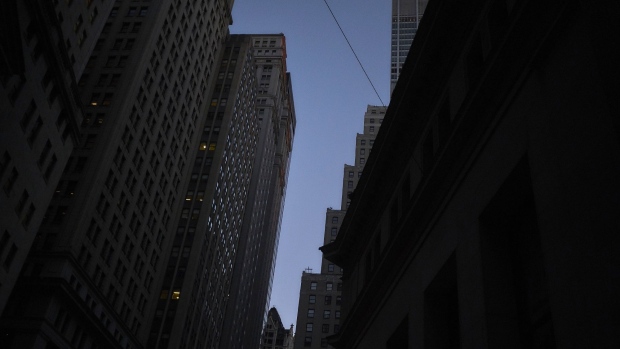 Buildings stand near the New York Stock Exchange (NYSE) in New York, U.S., on Thursday, Dec. 27, 2018. Volatility returned to U.S. markets, with stocks tumbling back toward a bear market after the biggest rally in nearly a decade evaporates. Photographer: John Taggart/Bloomberg , Bloomberg

The fear-driven rush into Treasuries pushed one of the world’s most-popular bond ETFs to the biggest rally since the 2010 flash crash in stocks.

BlackRock Inc.’s US$22 billion iShares 20+ Year Treasury Bond fund, ticker TLT, rallied as much as 6.4 per cent on Friday as investors plowed into U.S. debt. That was the fund’s biggest jump since May 6, 2010, when the Dow Jones Industrial Average tumbled nearly 1,000 points in a matter of minutes.

Deepening concerns over the outbreak’s rapid spread and the potential economic impact kicked off a wave of haven buying to end the week. Rates on 10-year Treasuries plummeted to record lows, while risk assets shuddered. With yields below 1 per cent on every tenor except the 30-year bond, investors are likely looking for “the most bang for their buck,” according to Lisa Hornby at Schroders.

“This is just a panicked market situation, so you want the most duration you can get,” said Hornby, a multi-asset fixed-income money manager. “People don’t want to go home with risk over the weekend.”

The number of coronavirus cases globally approached 100,000. Yields on benchmark U.S. debt slid as low as 0.66 per cent on Friday, while rates on 30-year bonds fell to an all-time low of 1.20 per cent.

While liquidity concerns reigned in cash markets, volume in TLT spiked. Trading was over 440 per cent greater than the fund’s 20-day average turnover as of 2:14 p.m. in New York Friday, with nearly 50 million shares changing hands by midday. That compares with an average of 9 million over the past 20 days.

The same fear buoying Treasuries is roiling the credit market amid an increasing threat to corporate cash flows. A derivatives index used to hedge against losses surged by the most since at least 2011.

“Credit markets were very close to cycle tights at the beginning of the year,” Hornby said. “Markets are just starting to look at the fact that we were perhaps way too tight given the potential risks out there.”