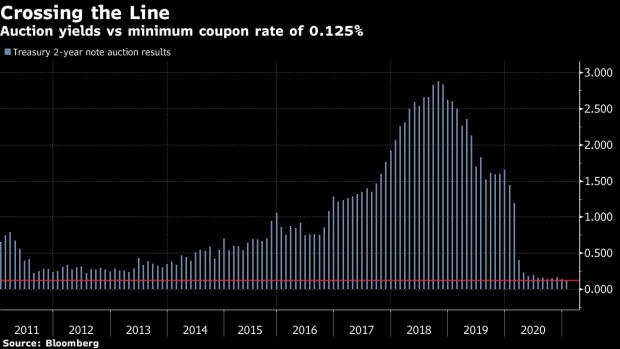 (Bloomberg) -- Long-term U.S. Treasury yields may be surging lately, but investors are about to get a reminder of just how incredibly low short-end rates still are.

The department’s $60 billion sale of two-year notes on Tuesday is poised to break one of the few remaining records of the low interest-rate era. Since pre-auction trading started last week, the notes being sold at 1 p.m. New York time have consistently yielded less than 0.125%. Because Treasury notes and bonds by regulation have a minimum coupon rate of 0.125%, an auction that draws a yield below that level, which would be a first, would be priced at a premium above 100 cents on the dollar.

The prospect of a new-issue premium has few if any practical implications. However, it highlights what’s happening in U.S. short-term interest rates, where yields on Treasury bills have flirted with zero this month as the government removes supply even as a wall of cash looks for a home. That phenomenon, and the Federal Reserve’s pledge to keep policy ultra-loose for the foreseeable future, is widening the gulf with long-term rates. Yields on those maturities have risen to the highest in about a year on the prospect of economic recovery and faster inflation.

“When the Fed’s committed to keeping rates at or near zero, twos are probably cheap at 10 basis points,” said Glen Capelo, managing director at Mischler Financial, who began trading Treasuries in 1986. “It’s a little crazy that you have to buy them at that yield, but that’s your choice.”

That’s never happened before in a new-issue auction for a nominal Treasury note or bond, because there’s never been a result lower than 0.125%.

Treasury note and bond auctions that previously have resulted in premium prices have included reopenings and TIPS auctions. In a reopening, more of an existing security is sold, and if the auction yield is lower than the coupon, the price will be a premium. Several TIPS new issues also have sold at premiums because they’ve drawn yields below 0.125%.

In pre-auction trading Tuesday, the new note was yielding around 0.11%. For today’s traders, the highest-ever coupon rate for a Treasury security must be hard to imagine: 16.25% for the two-year sold in August 1981, according to Bloomberg data.