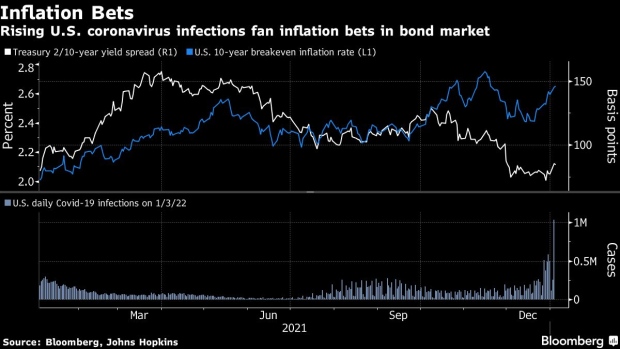 (Bloomberg) -- Treasury traders are betting the rapid spread of the omicron variant will increase inflationary pressures in the U.S. economy, rather than weaken them.

U.S. 10-year break-even rates -- which are market estimates for the average rate of inflation over the next decade -- climbed to as high as 2.65% on Tuesday, the most since November, and up from as low as 2.36% on Dec. 14. The extra yield on Treasury 10-year notes over two-year securities also jumped, indicating the bias may be switching back to a steeper yield curve.

The U.S. announced a new daily record of more than 1 million virus cases on Monday, further damping optimism that supply chains will return to normalcy in the near future. The annual U.S. inflation rate has climbed for three straight months to reach a four-decade high of 6.8% in November.

“Inflation continues to be the major theme of the market given life with the coronavirus,” said Makoto Noji, chief currency and foreign bond strategist at SMBC Nikko Securities Inc. in Tokyo. There is speculation that “the widening spread of the virus will lead to a decline in labor participation and supply constraints,” he wrote in a research note.

Overnight-index swaps are now suggesting the Federal Reserve will start to raise its policy rate as soon as May, earlier than the July liftoff projected a month ago.