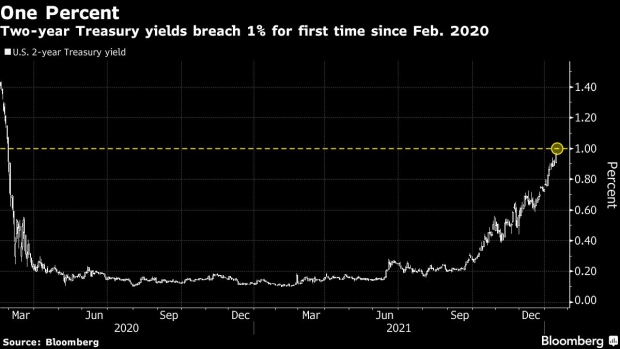 (Bloomberg) -- Treasuries fell across the curve Tuesday, with two-year yields rising above 1% for the first time since 2020 on increased speculation of a Federal Reserve rate hike in March.

Investors are increasingly concerned that elevated U.S. inflation will prompt the Fed to tighten policy faster than expected, with markets now pricing in just over one hike in March. Billionaire investor Bill Ackman argued for a bigger-than-expected 50 basis points move that month, while JPMorgan Chase & Co. Chief Executive Officer Jamie Dimon said Friday the central bank could raise rates as many as seven times.

Read: What Strategists Are Eyeing in Markets as Treasury Yields Spike

“The big theme in rates markets this year, particularly in the U.S., should be higher yields and flatter curves, as U.S. rate hikes get underway,” said Andrew Ticehurst, a rates strategist at Nomura Holdings Inc. “History would suggest that 10-year yields are unlikely to peak before the first rate hike of the cycle.”

Bonds sold off Monday around the globe even with U.S. markets shut, with Germany’s 10-year yield climbing to within three basis points of turning positive for the first time in almost three years.