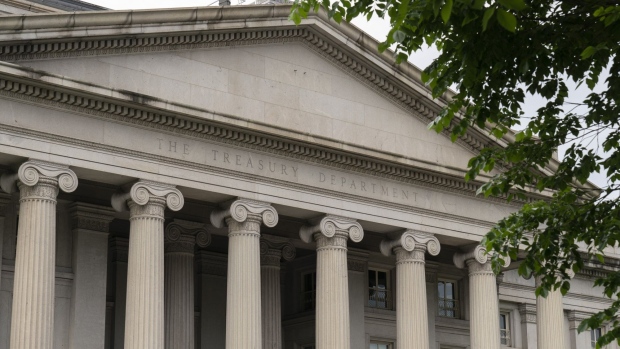 The US Treasury building in Washington, D.C., US, on Sunday, May 22, 2022. The Federal Reserve raised interest rates by 50 basis points earlier this month and the chairman indicated it was on track to make similar-sized moves at its meetings in June and July. Photographer: Joshua Roberts/Bloomberg , Bloomberg

(Bloomberg) -- European bonds fell as markets digested the possibility that central banks will need to ramp up the scale of rate hikes to rein in rampant inflation.

Italian bonds led losses in the region on Thursday, sending the 10-year yield above 4% for the first time since June 15. German debt also slipped, leaving the two-year rate within a whisker of its June peak. Traders are now betting on 241 basis points of hikes by July next year, double what they were expecting just a month ago.

The moves suggest investors are coming round to the idea that a once-unthinkable jumbo hike from the European Central Bank may come by October. ECB Governing Council member Joachim Nagel urged a “strong” reaction from policymakers to Wednesday’s 9.1% inflation print when they meet next week to decide how aggressively they need to raise borrowing costs.

“The argument that a 75 basis-point hike would cause undue volatility has become weaker,” said Mohit Kumar, a rates strategist at Jefferies International. “Front-loading of hikes would make sense” given an economic slowdown may curtail policy makers’ ability to hike beyond the first quarter of 2023, he added.

The premium investors demand to hold Italian debt briefly climbed above 240 basis points, around the level that prompted the ECB to announce a new crisis tool to limit a potential blow-up in bond yields by more vulnerable euro-area nations earlier in the summer. The spread declined to as low as 181 basis points in early July.

Treasuries were holding steady after five consecutive days of losses, reflecting a slump in risk appetite. A global equity index hit a six-week low as Europe’s Stoxx 600 and Nasdaq 100 futures slid more than 1%.

Still, US yields remain elevated. The two-year Treasury yield touched 3.50% for the first time since 2007 after comments from Fed officials this week signaled further aggressive rate hikes. Federal Reserve Chair Jerome Powell has seemingly concluded that it will something more painful than a soft economic landing to tackle a pernicious inflation rate running at more than triple the 2% target.

“Yields are likely to keep marching higher until the Fed makes it clear it is getting closer to the top of the cycle,” said Prashant Newnaha, a rates strategist at TD Securities in Singapore. “The risks are arguably skewed toward a higher terminal rate for the Fed.”

The strong determination to fight inflation shown at Jackson Hole has gathered momentum with Cleveland Fed President Loretta Mester the latest policy maker to push back against the idea that the central bank could soon reverse course.

Swaps markets showed traders boosting the odds of a three-quarter point Federal Reserve rate hike this month to almost 70%, with bets paring on a rate cut next year.