The pressure on long bond yields is going global, led by Treasuries and U.K. gilts, as investors reconsider reflation expectations and brace for an eventual pullback of central bank stimulus.

The Treasury five- to 30-year yield spread, which reflects the balance between the interest-rate outlook and inflation expectations, narrowed to the smallest gap since August. Its U.K. counterpart narrowed the least since December. That compression was driven by 30-year yields’ decline to the lowest levels since February, before trading little changed at 2.03 per cent in the U.S. and 1.2 per cent in Britain as of 6:30 a.m. in New York. 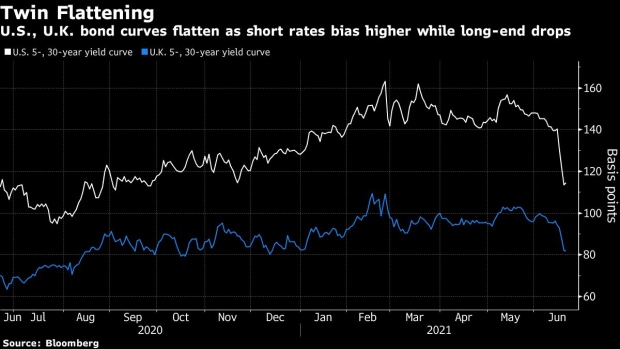 “There are two legs to this unwind: first is a peak in the inflation narrative as we work our way through those base effects and one-time reopening effects in term of price implications,” Viraj Patel, global macro strategist at Vanda Research, said in an interview with Bloomberg Television.

“The second thing is that central banks, especially those in the U.S. and China, are telling us that actually these unconventional easy monetary policy conditions that we’ve been used to for the past 12 months aren’t likely to exist forever,” Patel added.

Traders are adjusting positions as they scale back on reflation trades in the wake of the Federal Reserve’s hawkish pivot last week, which fueled a scramble to unwind curve steepeners. The likes of Morgan Stanley and TD Securities were stopped out of recommended trades, while Goldman Sachs analysts unwound outright 30-year short positions.

“We’re now seeing the market readjust to thoughts the Fed could move sooner, which means reducing expectations both for inflation and real rates in the long-term, while boosting those real rate expectations in the zero to five-year area,” said Richard Kelly, head of global strategy at Toronto-Dominion Bank. “The market had been positioning for a very patient Fed.” 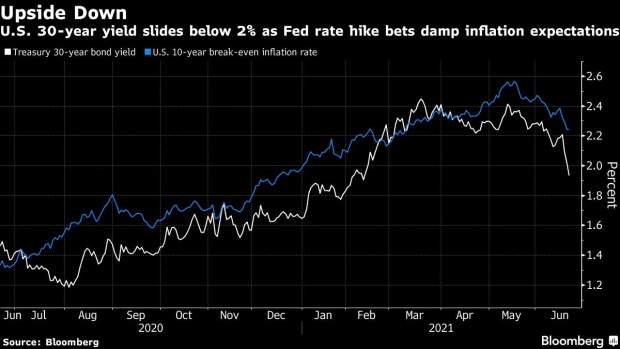 It’s not just bond traders on high alert for what Fed speakers say next. Currency investors are also back to scrutinizing comments from central bankers, after months of diminishing volatility. Bullard is due to speak again on Monday along with Dallas Fed President Robert Kaplan and New York Fed President John Williams, before Chair Jerome Powell testifies to Congress on Tuesday.

The U.K. yield curve mirrored the flattening in its U.S. peer on Monday. TD Bank’s Kelly said that shows gilts are likely “along for the ride in the global rates repricing,” until the Bank of England provides an update alongside its decision on Thursday. Still, BOE policy makers may not have much to add at this point as they’ve been relatively hawkish heading into the meeting, he added.

Positioning in the bond futures market collapsed for a second session on Friday, consistent with large unwinds of trades. Across major bond futures, open interest -- a measure of outstanding positions -- dropped by the equivalent of around US$12.5 billion of 10-year cash bonds.

The shift has triggered a flattening in the yield curve elsewhere as investors speculate that other central banks can afford to turn more hawkish without fueling excessive gains in their currencies. Australia’s three- and 10-year spread is at the narrowest since February, and a similar trend was observed in New Zealand.

“It’s just an adjustment in timing and clearing out of these excessive positions on the reflation trade,” Kokou Agbo-Bloua, head of economics, cross-asset and quant research at Societe Generale, said on Bloomberg Television. “What’s happening is just a repricing of the pace of the tightening of the Fed. But if you look at the current environment, they haven’t really done anything yet.”