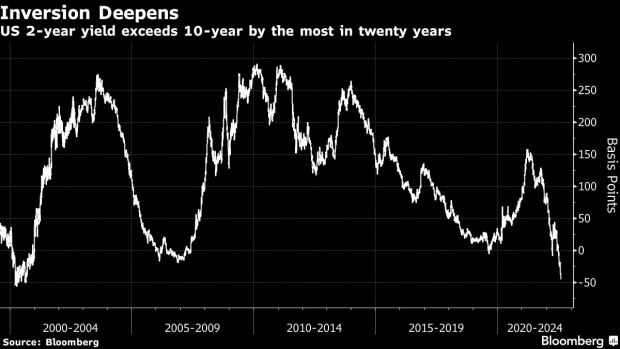 (Bloomberg) -- The US Treasury yield curve could invert more deeply than at any time since the 1980s, if Bank of America’s estimates about the impact of Federal Reserve policy expectations are accurate.

“The extent of inversion will depend on the terminal rate, which will likely be a function of inflation,” Meghan Swiber, director of US rates strategy at BofA, said in a report.

The two-year Treasury yield was 48 basis points above the 10-year rate on Wednesday, after coming within a whisker overnight of touching the 50-basis-point milestone last seen in August 2000. That’s based on expectations the Fed’s rate will peak at around 3.5%, from a current range of 2.25%-2.5%, according to the strategist.

Attention is keenly focused on the yield curve slope as sustained inversions in past decades have been followed by economic downturns over the ensuing 12 to 18 months. During April 2000 -- a time when the US Treasury was buying back debt and the Fed was tightening policy -- the two- to 10-year curve inverted as much as 56 basis points.

The US curve dropped to more than 200 basis points below zero in the early 1980s, when then Federal Reserve Chairman Paul Volcker hiked interest rates to 20% to combat annual inflation which reached a peak of 14.8%.

And it isn’t just the US bond market that’s signaling that a recession may be on the horizon. New Zealand’s two-year yields exceeded 10-year rates for the first time since 2015 on Wednesday. The difference between Australia’s 10- and three-year bond futures -- its favored measure -- is at the flattest in more than a decade, while the UK’s yield curve briefly inverted earlier this month.

While US inversions beyond 50 basis points have been rare in recent decades, “there is no natural limit on how inverted the 2s10s curve can go,” Swiber wrote. The prospect of a hard landing for the US economy, “will likely skew curves flatter as hikes near term will probably be viewed as needed cuts in the future.” If growth remains strong, “the curve may continue to flatten but to a lesser extent with longer-dated tenors also supported.”