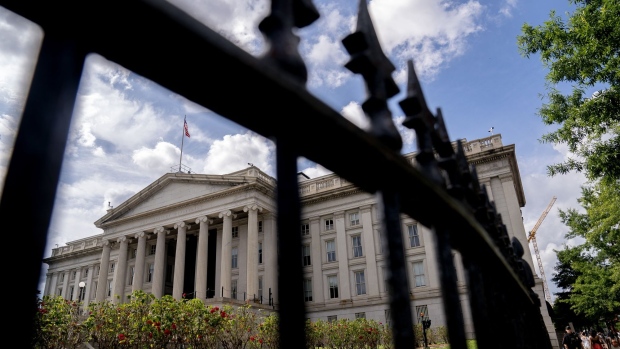 The U.S. Treasury Department building in Washington, D.C., U.S., on Saturday, June 26, 2021. The Federal Reserve might consider an interest-rate hike from near zero as soon as late 2022 as the labor market reaches full employment and inflation is at the central bank's goal. , Bloomberg

Treasury yields climbed Friday, with the 10- and 30-year tenors reaching the highest levels since June, as traders concluded that the Federal Reserve’s timeline for tapering asset purchases is probably intact despite weak job creation last month.

While the bond market vacillated for about an hour after the release of the Labor Department’s September employment report, the 10-year yield later rose as much as 4.2 basis points to 1.615 per cent, while the 30-year touched 2.177 per cent. Shorter-maturity yields rose less, resulting in a steeper yield curve.

Offsetting the weak job-creation number were an upward revision to August payrolls, a bigger-than-expected drop in unemployment and a faster pace of wage growth -- metrics that support the argument that the Fed should respond to price pressures in the economy.

“Today’s employment series looks to meet the minimum threshold for Fed to move forward with tapering in November,” said David Gagnon, managing director in U.S. Treasury trading at Academy Securities, Inc. Declining unemployment, in particular for minority subgroups, which the central bank has called for, “should give Fed officials comfort that jobs are headed in the right direction.”

The spread from the 5-year to the 30-year reached 113.9 basis points, wider by 3.6 basis point on the day and near the high end of its range over the past month. Over the past two weeks, curve-steepening has accompanied gains for commodity prices and outperformance by inflation-protected bonds. That also continued Friday, with breakeven rates for inflation-protected Treasuries approaching their 2021 highs, reached in May. 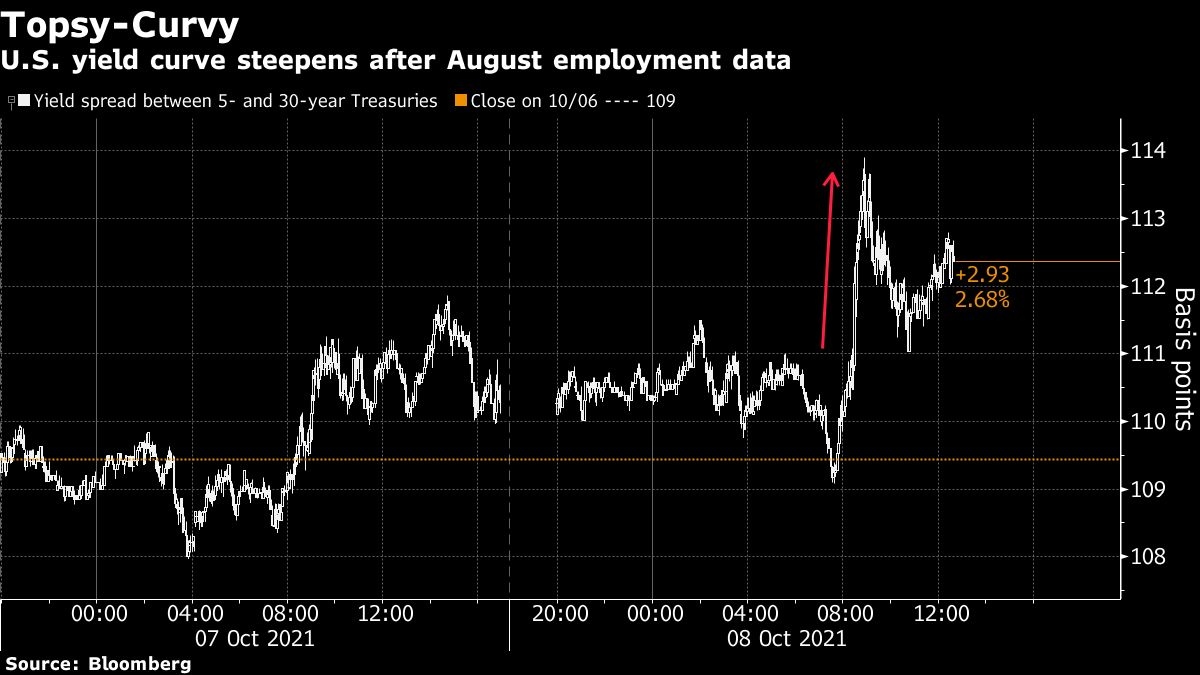 The Fed is in the process of deciding when and how to begin to remove the massive amounts of monetary policy accommodation it provided to avert an economic collapse during the pandemic. A surge in consumer inflation gauges - which Fed officials have maintained is likely to abate as economic activity returns to normal - is forcing the issue.

Fed Chair Jerome Powell said last month the U.S. central bank could begin scaling back asset purchases in November and complete the process by mid-2022, after officials revealed a growing inclination to raise interest rates next year. However, he left the door open to waiting longer if needed.

The central bank has been purchasing US$80 billion in Treasuries and US$40 billion in mortgage securities each month since 2020. Officials had pledged to maintain bond buying until the economy shows “substantial further progress” on inflation and employment as it recovers from COVID-19.

As for raising interest rates, the eurodollar futures market Friday priced in slightly higher odds of an increase next year. Market-implied expectations remain well below the median forecasts of Fed officials released last month, though.

Curve-steepening also has support from the Treasury auction schedule, which includes 10- and 30-year debt sales in a compressed schedule next week. With the Fed closed Monday for Columbus Day, Treasury trading will resume Tuesday. Three- and 10-year auctions will be held Tuesday, followed by the 30-year on Wednesday.

The curve has shown a tendency to flatten following 30-year supply, according to Credit Suisse strategist Jonathan Cohn, who noted that the curve has been about five basis points flatter on average in days following the last four auctions.

“We have to be mindful of potential convexity flows or further steepening on reflation-oriented trading,” Cohn said. “Of course, the curve tends to flatten into and through hiking cycles, so chasing steepening may not be the most sensible move from a thematic perspective.”