If there is a recession, it won’t be severe: Pierre Ouimet

U.S. Treasuries tumbled, sending 2-year yields surging by the most since 2009, after an unexpected jump in inflation increased speculation the Federal Reserve will need to raise interest rates more aggressively over the next few months.

The surge in consumer prices in May to a fresh four-decade high surprised investors who were looking for signs that inflation had peaked and drove traders to price in expectations for half percentage-point rate hikes at the Fed’s June, July and September meetings. Barclays Plc became the first Wall Street bank to predict that the Fed will raise rates by three-quarters of a percentage point at its meeting next week, while swaps have started placing even odds on such a move in July.

The revised expectations drove the yield on 2-year Treasuries up 26 basis points to 3.07 per cent, the highest level in 14 years. The steep upward move in short rates left 30-year yields below those on 5-year notes, signaling the risk the central bank’s tightening will starkly slow economic growth or set off a recession.

A 50-basis-point Fed rate increase “is on the table now for each meeting, and it’s a still a matter of front-loading rate hikes until inflation starts falling,” said Gregory Faranello at AmeriVet Securities. “There will be talk of 75 in the market,” but Fed Chair Jerome Powell is likely to prefer a more measured pace, Faranello said. 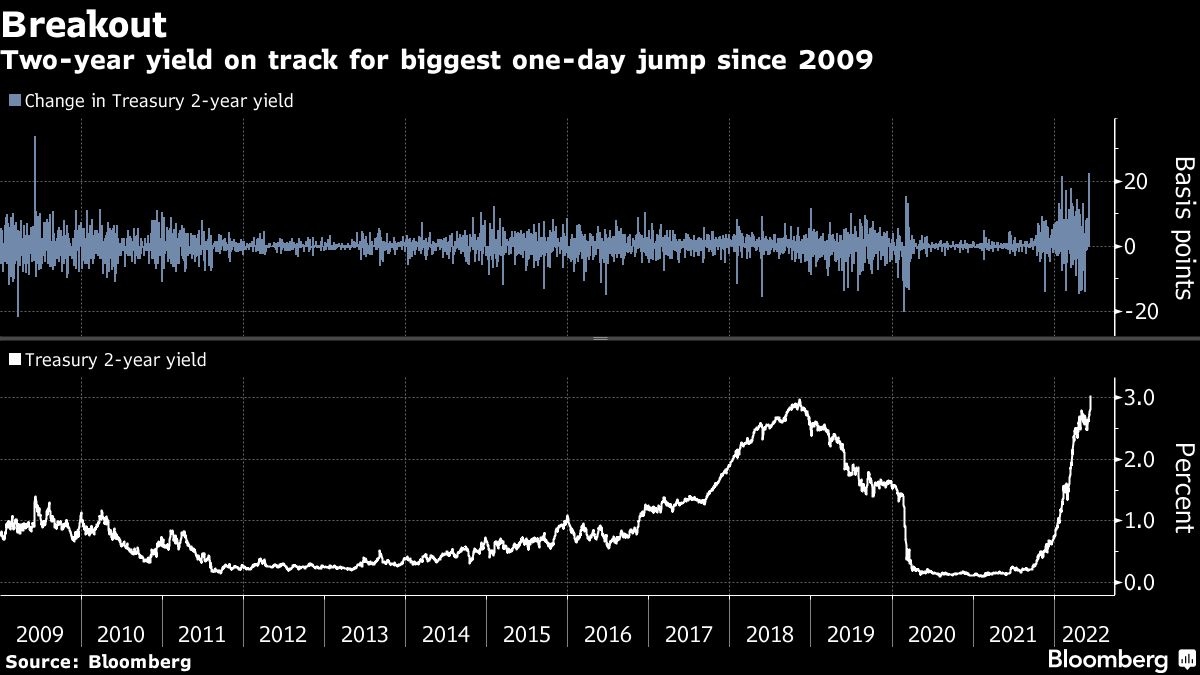 The steady rise in consumer prices is coming after the central bank has started to tighten monetary policy and consumer confidence is eroding. That’s increasing concern that the economy could see inflation persist even as growth slows or contracts, in a potential repeat of the so-called stagflation of the late 1970s. The S&P 500 Index fell 2.9 per cent.

“We are looking at a stagflationary environment,” Michael Darda, the chief economist at MKM Partners, said on Bloomberg television. “The Fed is still behind the curve.”

The consumer price index increased 8.6 per cent in May from a year earlier, the fastest pace in four decades, Labor Department data showed Friday. The inflation gauge rose 1 per cent during the month, topping all estimates. Core inflation, which strips out volatile food and energy prices, also rose more than forecast.

“There is no doubt we are slowing the economy,” said Jim Paulsen, chief investment strategist at Leuthold Weeden Capital Management in Minneapolis.

Rates globally have been rising, with those in Europe jumping after the European Central Bank on Thursday committed to a quarter-point increase in interest rates next month and signaled a bigger hike in the fall.