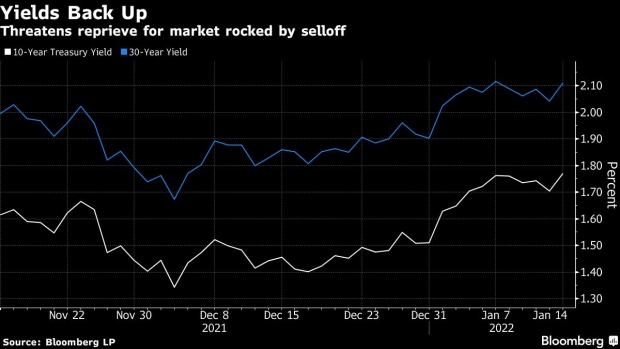 (Bloomberg) -- Treasuries wiped out gains posted earlier in the week to resume their decline Friday, amid a renewed focus on the Federal Reserve’s resolve to pare pandemic stimulus as inflation surges at the fastest pace in four decades.

The bearish turn came despite weaker-than-expected retail sales figures that briefly supported the market earlier in the day. It also caps what had been a relatively calm week for investors, with prices steadying from the steep selloff that raced through the world’s biggest bond market last week.

JPMorgan Chase & Co. Chief Executive Officer Jamie Dimon told analysts Friday that he expects the Fed to raise rates more than the market is currently pricing in, saying it may not be as “sweet and gentle” as some might expect.

“The late-week grind higher in yields ahead of the long weekend similarly speaks to investors’ collective unwillingness to embrace the consolidation beyond simply a respite in the selling pressure as over-stretched momentum is worked off,” said Ian Lyngen, head of U.S. rates strategy at BMO Capital Markets. “The Treasury market is continuing to trade inflation as justification to push yields up.”

The moves reflect broad market conviction that the Fed will start raising rates in March and begin shrinking its $8.8 trillion balance sheet in the second half of the year. The latter shift -- which would result from the monetary authority declining to roll over maturing securities -- has cast considerable uncertainty over the Treasury market and would mark a swifter pullback than the Fed’s approach during the last tightening cycle.

At the same time, there are questions about whether a series of relatively shallow rate hikes would tamp down the steepest inflation in four decades -- or if the Fed could find itself behind the curve, fighting a type of wage-price spiral like the one that gripped the nation in the early 1980s.

Fed Chair Jerome Powell said this week the central bank is prepared to crank up the pace of tightening if needed and some officials have been pushing for the bank to shrink its bond holdings at a faster pace.

The Fed’s trajectory is seen justifying a climb in 10-year yields above 2%, an area previously frequented in mid-2019.

“A 10-year Treasury yield rising toward 2.25% makes sense with the Fed indicating that it will make a fast start to tightening this year,” said Jason Bloom, head of fixed income and alternatives ETF strategies at Invesco.

Garry Evans, chief global asset allocation strategist at BCA Research, has been expecting the Fed to make three quarter-point hikes this year, with the risk of a fourth, and downplays the risk of a faster tightening cycle. But he said “a price/wage spiral” would prompt more aggressive moves.

“There is a risk that wages go higher and the Fed starts worrying,” Evans said, after which “the market starts pricing in a scenario that the Fed has lost control of inflation.”