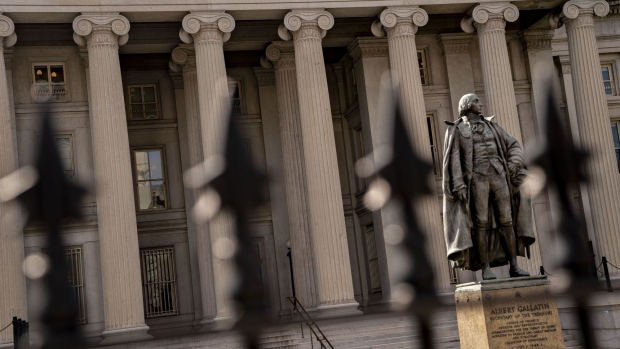 The pullback in US debt markets drove yields up by 16 basis points on 3-year Treasuries, while the 10-year rate jumped 10 basis points to 3.59%. Swaps showed a similar increase in expectations for where the Fed’s policy rate will peak, with the market indicating a crest of about 5% in the middle of 2023, up from a range of 3.75% to 4% currently. The dollar also jumped, while US stocks lost ground.

The Treasury market was already under pressure Monday ahead of the key data on services and factory orders that showed a healthier economic picture.

Treasury yields between five and 10 years remained within their Friday ranges, when a robust jobs report prompted a surge in yields that then largely faded out by the end of the day. Selling pressure in the front-end late in New York pushed the two-year yield to more than 0.818 percentage points above the 10-year, marking a new inversion low since 1981 and eclipsing a level seen late last month.

Monday’s moves got a major push from a fresh reading of the Institute for Supply Management’s services gauge, which unexpectedly rose to 56.5 in November from 54.4 the month before. The increase in the business activity measure was the biggest since March 2021, suggesting the largest part of the US economy remains resilient.

“That’s a hard number to argue with,” said Tony Farren, managing director in rates sales and trading at Mischler Financial Group. “The long-end of the Treasury market has been saying the economy’s going to roll over. This takes away one of the pieces of ammo for the long-end to say: despite employment, the economy’s weak.”

Markets could continue to be choppy as the end of the year approaches and along with it the final Fed meeting of 2022 on Dec. 13-14. Markets continue to price a half-point increase for that gathering, little changed from before the most recent data, which would represent a slowing in the pace of tightening. The Fed boosted rates by 75 basis points at its last meeting.

Officials from the central bank are in the traditional pre-meeting blackout period and unable to give further guidance, so investors are likely to be even more keenly focused on data releases, including next week’s consumer-price inflation report.

On top of that, liquidity -- already under strain -- is typically less ample heading into the final holiday-affected stretch of the year, meaning there is scope for smaller transactions to spur large moves.

Thinning year-end liquidity is playing a big role in exacerbating swings and “each data release has an outsized influence” in such an environment, said Lindsay Rosner, a portfolio manager at PGIM. “The jobs number was strong and that makes people nervous. Year end is an impactful time of tax-loss harvesting and positioning for next year. Everyone is trying to figure out the trend for the economy and Fed policy and this will continue into next year.”

--With assistance from Michael MacKenzie and Boris Korby.