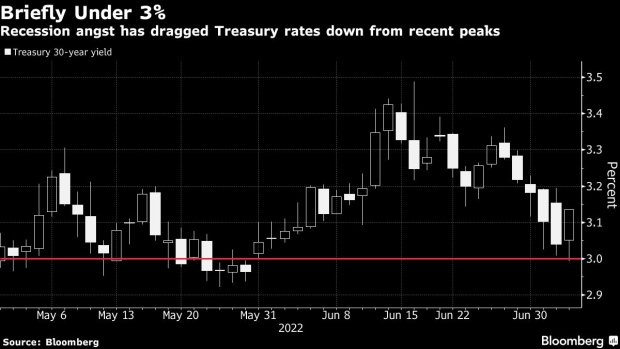 The selloff in bonds intensified after the record from the Fed’s June meeting showed officials saw the possibility of “even more restrictive” policy should price pressures persist. The selling pressure extended after Wall Street closed with two-, and three-year yields -- among those that are more sensitive to central bank policy -- back to 3% for a rise of more than 18 basis points on the day.

The minutes revealed officials saw a 50 or 75-basis-point hike in July as likely -- in line with Chair Jerome Powell’s remarks made after the last meeting. Policy makers raised rates by 75 basis points in mid-June in the largest increase since 1994. Swaps linked to the dates of upcoming Fed meetings are now pricing more than a four-in-five chance of another three-quarter-point hike in July. Meanwhile, expectations for where the tightening cycle will peak in the early part of 2023 have climbed back up above 3.4%, having earlier been down toward 3.2%.

“90 mentions of inflation’ contrasted with no mentions of ‘recession’ in the release,” Ian Lyngen, head of US rates strategy at BMO Capital Markets, said in a note after the minutes were released. “The acknowledgment that the Committee’s action would slow growth for a time is very much in keeping with the monetary policy trade off currently underway as recession risks rise, but the Fed is still committed to hiking.”

A rally in bonds earlier Wednesday briefly took the 30-year yield below 3% for the first time since May.

“Inflation is going to stay high and essentially what that means is that it will be too high for the Fed’s comfort,” Jim Caron, portfolio manager at Morgan Stanley Investment Management, told Bloomberg Television. That means the central bank will likely hike by 75 basis points in July and by 50 basis points in September, “unless really bad things start to happen or something breaks,” he added.

Treasury inflation expectations held near lows for the year as they extended a hefty drop from peaks in mid-June. The five-year breakeven briefly broke below 2.5%, hitting the lowest level since September.

Participate Now: We want to hear your thoughts on crypto in the latest MLIV Pulse survey