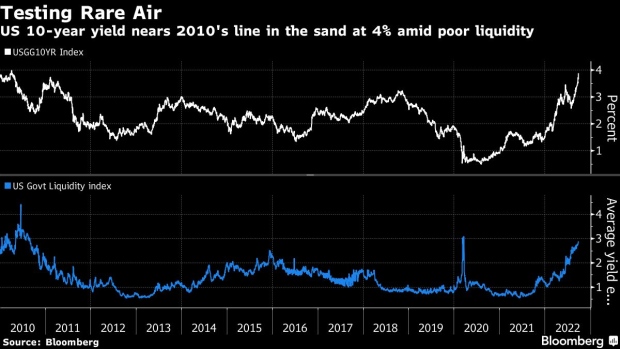 The US Treasury building in Washington, D.C., US, on Sunday, May 22, 2022. The Federal Reserve raised interest rates by 50 basis points earlier this month and the chairman indicated it was on track to make similar-sized moves at its meetings in June and July. , Bloomberg

(Bloomberg) -- US Treasury yields surged on Monday, with poor demand for a two-year note auction triggering renewed selling that propelled key benchmarks higher by more than 20 basis points -- and sent the 10-year rate up by the most since the March 2020 Covid crash.

US inflation stuck near a four-decade high and a hawkish Federal Reserve that now expects to push policy rates to at least 4.6% in 2023 are driving bearish market sentiment, with poor liquidity exacerbating the moves. A renewed surge in UK gilt yields, with key benchmarks rising around 40 to 50 basis points, also added pressure to the global bond market.

Both nominal and inflation adjusted yields climbed to fresh multi-year peaks, accelerating a deepening rout. The 10-year rose as much as 24 basis points to 3.93% in New York, its highest level since April 2010. Treasury options flow was active and mixed in direction with yields at extended peaks. The benchmark US yield fell as much as six basis points to 3.86% in the Asian session on Tuesday.

“The Fed is in a situation where they have to go harder and the market is picking up on this,” said Jason Pride, chief investment officer of private wealth at Glenmede Investment Management. “If you step back and look at the big picture, the Fed genuinely wants higher rates.”

The front-end of the Treasury curve came under pressure after bonds at the two-year auction were sold at yields above the prevailing market rate at the time bidding closed, a sign that surging bond yields aren’t enough to lure buyers. That sets a gloomy prognosis for the upcoming sales of five-, and seven-year notes this week, especially as month- and quarter-end liquidity tends to be thinner.

Worries that Fed policy will push the economy into recession were being flagged by the 30-year bond lagging the selloff, with its yield up 13 basis points at 3.74%. The spread between the two- and 30-year yields widened to as much as negative 0.68 percentage points, the deepest inversion since 2000, before easing back to unchanged late in trading on Monday. The spread on 2- and 10-year Treasuries was minus 43 basis points, about 10 basis closer to positive territory.