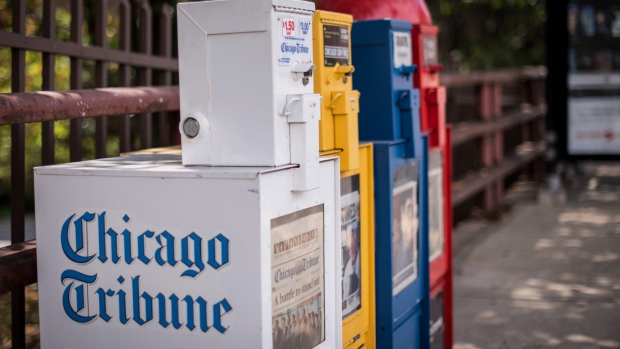 Tribune Publishing Co. is offering buyouts to eligible workers across the company, embarking on a round of cutbacks in the wake of hedge fund Alden Global Capital LLC becoming its top investor.

Tribune Chief Executive Officer Tim Knight cited “industry headwinds” in announcing the buyout plan in a memo to employees. The company publishes the namesake Chicago Tribune and other big-city newspapers and, like its peers, has suffered from declining print readership and ad revenue.

“While it is our desire to retain all of our talented employees, we must confront and plan for the significant financial hurdles ahead,” he said. “We are part of an industry in transition.”

Alden, a firm known for making deep cuts to newsrooms, bought out the Tribune’s largest stockholder in November, spurring speculation that its staff would be further squeezed. The hedge fund purchased 9.07 million shares from Michael Ferro and his Merrick Ventures for about $118 million. Tribune entered talks with Alden to put two of the firm’s representatives on the board.

Upheaval at the company intensified after Ferro became its previous top shareholder and took over as chairman in early 2016. He stepped down in March 2018 just as Fortune magazine was set to detail sexual-harassment accusations against him.

The company was previously in talks to merge with McClatchy Co., though those discussions fizzled a year ago. Tribune also changed its name in 2016 to the widely ridiculed Tronc, part of an attempt to modernize the business. It went back to Tribune Publishing last year.

On the plus side, a push to get more readers to subscribe to online news has begun to pay off, Knight said in his memo.

“We’ve achieved significant growth in our digital-only subscriptions -- a result of the great cooperation among newsrooms, consumer marketing and digital product,” he said. “Because of your perseverance and dedication to our journalistic mission, I remain optimistic about our positioning for a strong 2020.”