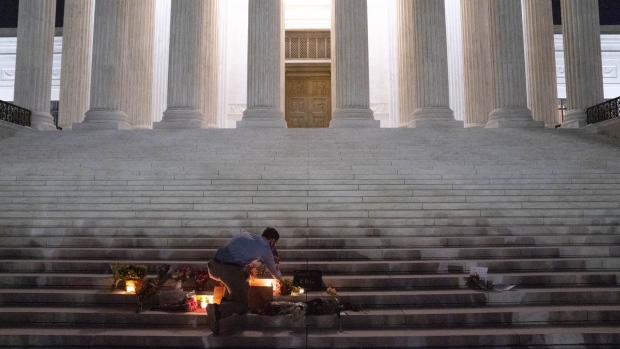 (Bloomberg) -- Tributes flooded in after the death Friday of Ruth Bader Ginsburg, the 87-year-old Supreme Court justice and liberal icon, after a long battle with cancer.

Here’s a selection of the responses:

Supreme Court Chief Justice John Roberts: “Our Nation has lost a jurist of historic stature. We at the Supreme Court have lost a cherished colleague. Today we mourn, but with confidence that future generations will remember Ruth Bader Ginsburg as we knew her -- a tireless and resolute champion of justice.”

Representative Jerrold Nadler, Democrat of New York, chairman of the House Judiciary Committee: “She will be remembered for her brilliant mind, her razor sharp wit, and her tenacious and lifelong fight to protect the rights of women in this country.”

White House Chief of Staff Mark Meadows: “Joining the whole nation tonight in mourning the loss of Justice Ruth Bader Ginsburg -- a trailblazer, a dedicated public servant, and an inspiration to so many. My prayers are with her family and friends.”

Senate Democratic Leader Chuck Schumer of New York: “Tonight we mourn the passing of a giant in American history, a champion for justice, a trailblazer for women. She would want us all to fight as hard as we can to preserve her legacy.”

Senator Elizabeth Warren, Democrat of Massachusetts: “The T-shirts labeled ‘RBG’ made her notorious. But it was her wit, her tenaciousness, and her skill as a jurist that made her an icon.”

Senate Majority Leader Mitch McConnell, Republican of Kentucky: “Her intelligence and determination earned her respect and admiration throughout the legal world, and indeed throughout the entire nation.”

Sarah Silverman, comedian: “I know she tried to hang on, for all our sakes. She hung in there so hard.”