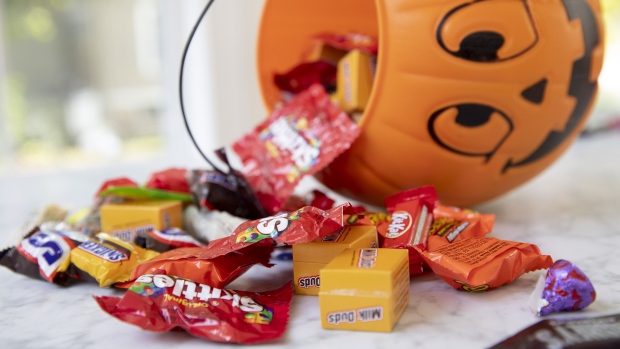 Mars Inc. and Hershey Co. brand Halloween candy is displayed for a photograph beside a pumpkin themed treat bucket in Tiskilwa, Illinois, U.S., on Sunday, Sept. 20, 2020. Costume-sellers appear to be facing one of their scariest fall seasons in a long time, even as confectioners could see sales hold steady from past years, with some candy brands even expecting an uptick. Photographer: Daniel Acker/Bloomberg , Bloomberg

Fewer Americans will trick-or-treat this Halloween as COVID-19 infection numbers continue to climb. While kids may be disappointed, the worst effects will be felt in Africa, where the world’s top cocoa producers may struggle to keep paying farmers a premium.

Ivory Coast and Ghana raised the price they pay cocoa growers by more than 20 per cent for the larger of two annual crops. But with the pandemic keeping people at home, hurting Halloween sales that account for 10 per cent of Hershey Co.’s business, the West African nations may struggle to lure chocolate makers to buy beans at a high enough level to keep paying farmers the promised premium.

The two countries, which account for about 70 per cent of supply, have started charging a premium of US$400 a metric ton for their beans, a move designed to improve incomes. But while the main crop is already sold, they still need to sell their smaller harvest, according to a Bloomberg survey of six traders, brokers and analysts.

“With a second wave of infections, are people really going to partake in Halloween?” said Judy Ganes, president of J Ganes Consulting. “Not sure how manufacturers with weak demand will be able to keep agreeing to pay higher prices, even if fundamentally they understand the need to.”

Cocoa processing in Europe fell 4.7 per cent in the third quarter, to the lowest for that period in four years, according the European Cocoa Association. In North America, bean grinding fell four per cent to the smallest for the period since at least 2008, the National Confectioners Association said. Cocoa Association of Asia data will be published on Friday.

Ivory Coast and Ghana usually sell about 80 per cent of the crop before harvest starts, and pay about 60 per cent of the international prices to growers. Forward sales this season took longer than usual to pick up as the countries negotiated with processors and chocolate makers regarding the premium, known as the Living Income Differential.

“They haven’t got the forward sales for the crop just yet,” said Jonathan Parkman, deputy head of agriculture at London-based futures and options brokerage Marex Spectron Group. “I think the LID issues will blow up in February and March and it will be very difficult to persuade buyers that they will need to pay the LID for the 2021-22 season.” They may need to restructure the LID, he added.

Cocoa futures have held up well this year despite the pandemic as uncertainty about elections in West Africa has supported prices. Still, the price of cocoa butter, which accounts for 20 per cent of the weight of a chocolate bar, has plunged more than 10 per cent since early April, amid global lockdowns, according to data from KnowledgeCharts, a unit of Commodities Risk Analysis.

“I think the futures market is in trouble,” Ganes said. “The market isn’t breaking down just yet because of worries over the situation in the Ivory Coast leading into the elections end of this month. However, indications on demand are pretty poor. Cocoa butter prices are starting to melt.”