Opposition to Trans Mountain Expansion on the rise: Poll

Opposition to the Trans Mountain expansion project is growing, according to a new study by the Angus Reid Institute (ARI).

According to a report released Tuesday entitled “End Game: As Supreme Court ruling removes another hurdle for TMX pipeline, opposition against it rises,” ARI found that opposition to the project among its participants has risen to 37 per cent from 31 per cent in June 2019.

The report found the mounting opposition comes despite 53-per-cent support from respondents for the recent Supreme Court of Canada decision denying British Columbia jurisdiction over what flows through the pipe. 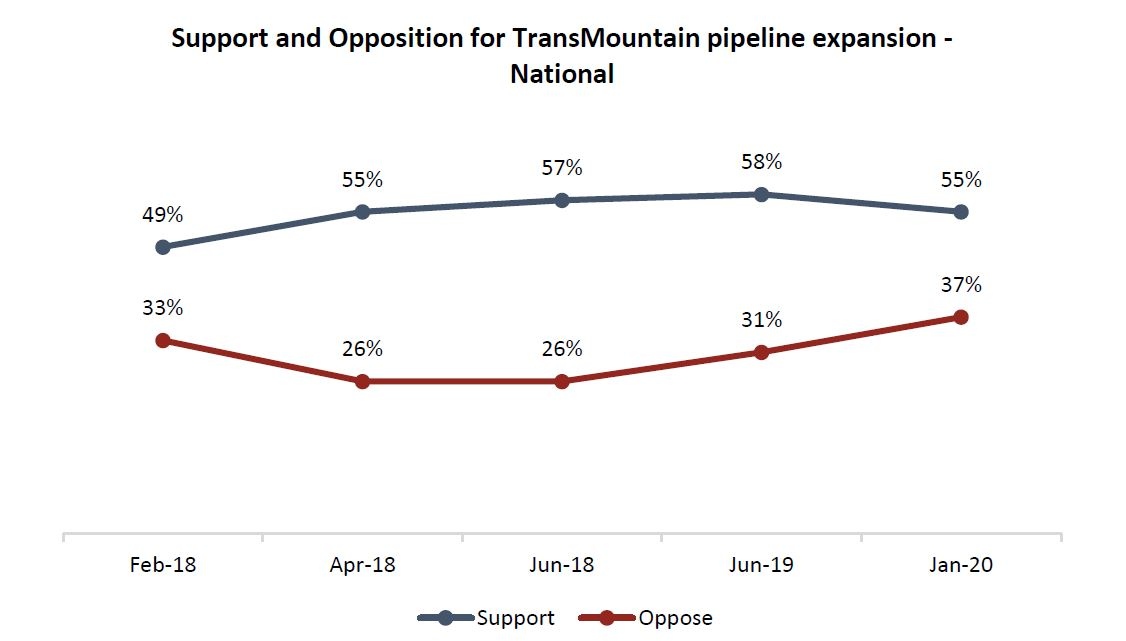 Of greater concern to Justin Trudeau’s new minority mandate is the geographical breakdown of said opposition, according to the study’s findings.

“While we still see slight majority support in every province for the project - with the notable exception of Quebec – one thing that’s really notable is that we’re starting to see greater opposition really harden in the three places the Liberal government has needed to rely on for political support,” ARI executive director Shachi Kurl told BNN Bloomberg in an interview on Tuesday. “That’s British Columbia, that’s Ontario, and that’s Quebec.”

“As we get closer to seeing more process and more judicial hurdles cleared, in order to get this thing done, public opinion – I think people who were opposed to it, who maybe went into a bit of a lull, because maybe they didn’t think it would get built – [is] all of a sudden waking up to the fact, that: ‘Hey wait a minute, we don’t like this thing.’”

The 18-point differential between those that support and oppose the project is the slimmest margin ARI has seen on the topic since Feb. 2018. Notaly, the poll data collected in 2018 – and its 16-point pro/con differential – was amid a widening interprovincial trade spat between then-Alberta premier Rachel Notely and B.C.’s John Horgan.

Kurl says the divide between the two neighbouring provinces is still wide, regardless of forward progress on the construction front.

“As opposition to the pipeline once again starts to grow in British Columbia, I think exasperation is really setting in in Alberta, where now you’ve seen the federal government – in order to prove to Albertans, and to the rest of the country that they’re serious about it – have to step in and buy the pipeline,” Kurl said.

“At the same time, we’re still not seeing that acceptance around federal jurisdiction.” 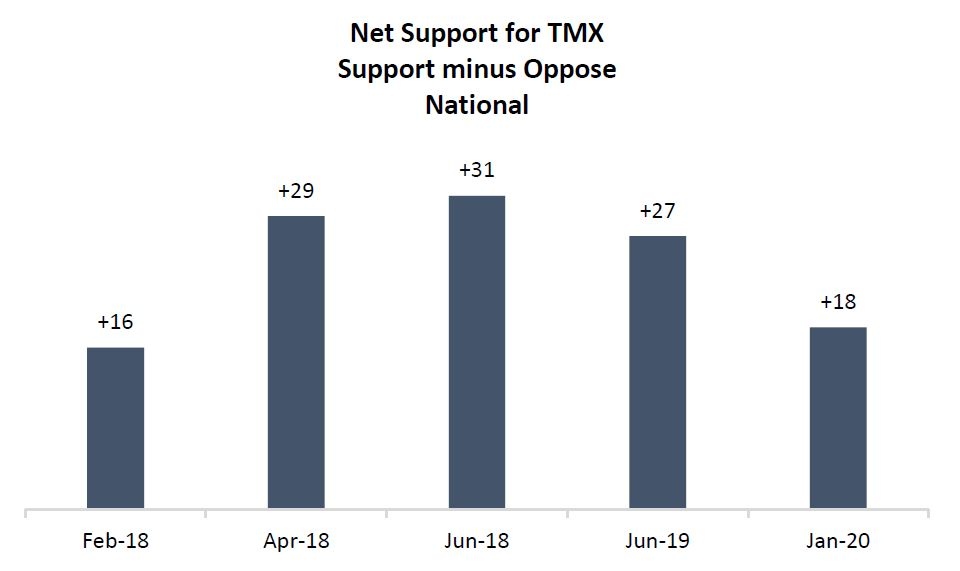 Kurl added that even if the Trudeau government is able to satisfy its critics within the Canadian energy industry, it’s unlikely to result in more support in future elections.

“The Trudeau government, interestingly, finds itself offside with elements of its own base,” she said. “Certainly, the number of Canadians that say that they’re doing enough to get the pipeline done has increased, but these are not natural Liberal voters. These are generally people who tend to vote for the Conservative Party and will not necessarily move their vote if this project ends up being completed.”

“On the flip-side of that, you see people saying that the Trudeau government is not doing enough to protect the environment … This has always been the trickiest needle for any government to thread.”

Tuesday’s data is the result of an online survey conducted Jan. 21-23, 2020 among a randomized group of 1,528 adult Angus Reid Forum members.