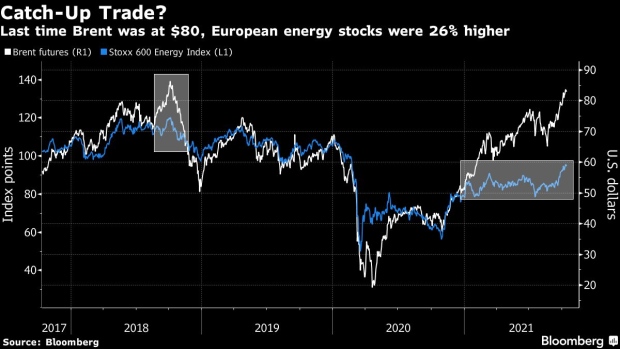 (Bloomberg) -- The commodity rally may be the talk of Wall Street, but old-school energy producers are still lagging the oil price big time -- a tell-tale sign the era of green investing is in full swing.

U.S. oil and gas companies are trading at less than half 2014 levels -- the last time West Texas Intermediate crude topped $80 a barrel -- while European energy equities are similarly underperforming. A key difference this time round: Trillions of investing dollars are now wedded to environmental, social, and governance rules that prohibit exposures to dirty energy.

All that is capping gains in the exploration and production sector this year, even as oil rides multiyear highs, the energy crunch spreads and demand rises for raw materials in the great economic reopening.

“Energy equities are nowhere close to where they were in 2014 when crude oil prices were at current levels,” Michael Shaoul, Chairman and Chief Executive Officer of Marketfield Asset Management, said in an interview with Bloomberg TV Tuesday.  “There are a couple very good reasons for that. One is it’s been a terrible place to be for a decade. And the other reason is the ESG pressures that a lot of institutional managers are on lead them to want to underplay investment in a lot of these areas.”

With around half of the world’s oil supply sourced from public companies, rising ESG pressure on the global energy industry “is constraining investment in oil and gas,” according to Morgan Stanley analysts led by Devin McDermott.

There are other reasons for underperformance: Poor spending decisions among energy producers have undercut business growth, per Morgan Stanley.

Still, a catch-up trade may be nigh. JPMorgan Chase & Co. strategists said on Monday that they expect “much more to go” for global energy stocks as they close the gap with the oil price -- reiterating their overweight call.

Meanwhile pension funds and insurers are touting their green credentials en masse. ESG investments hit a record $1.65 trillion in 2020, according to Morningstar research that tracks sustainable open-end and exchange-traded funds.

There’s also growing evidence that companies that don’t tick the ESG box are being punished. Exxon Mobil Corp.’s market value has fallen from more than $400 billion in 2014 to around $260 billion.

“The market remains skeptical,” Shaoul said. “I think relatively large amounts of money have been happy to jump into commodities and then jump out of them.”