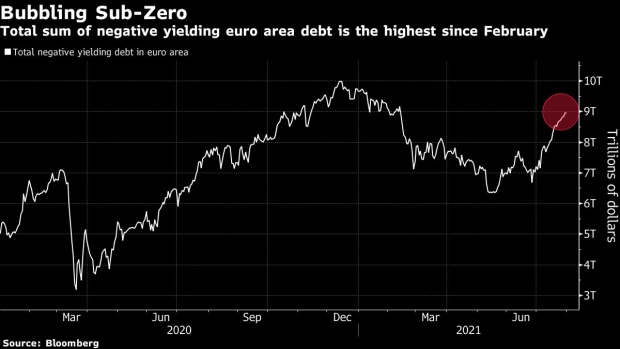 A bronze bull statue sits on display outside the Frankfurt Stock Exchange, operated by Deutsche Boerse AG, in Frankfurt, Germany, on Monday, Aug. 31, 2020. Figures demonstrate how the pandemic is further depressing inflation in the euro zone that was considered too low by the European Central Bank even before the crisis. Photographer: Alex Kraus/Bloomberg , Bloomberg

(Bloomberg) -- A deepening pool of debt with yields below zero is vindicating bullish bets on European bonds.

In a matter of weeks, German 10-year bond yields went from flirting with zero for the first time in two years to tumbling in July by the most since the start of 2020, all the way back to minus 0.46%. That decline -- which has ramped up bond prices -- has helped boost the amount of negative-yielding debt in Europe to 7.5 trillion euros ($8.9 trillion), near a six-month high.

Traders were whipsawed by reflation bets that initially sent borrowing costs surging, but lost altitude after major central banks emphasized continued support. At the same time, the spread of Covid-19 variants drove demand for the safest government debt, reviving a trade that dominated global markets in the midst of the pandemic last year.

Strategists at HSBC Holdings Plc and ABN Amro Bank NV never wavered from their calls for benchmark bund yields to end 2021 at around minus 0.50%, which have been in place since the first half of last year. That would erase a large portion of this year’s 54-basis point trough-to-peak advance.

Their conviction was only strengthened after the European Central Bank said last month that the current inflation spike has been driven by temporary factors, and that any shift in stance would depend on hitting the new 2% inflation goal.

HSBC’s forecast “was based on the assumption that there would be no rate hikes before the end of 2023,” said strategist Chris Attfield. “This is now mostly priced into the market, helped by the new ECB forward guidance.”

Money markets have been quick to trim bets on policy tightening after the ECB revised guidance on interest rates, saying it won’t necessarily react immediately if price growth exceeds that target for a “transitory” period.

In July, traders erased more 20 basis points from rate-hike wagers, according to swap contracts. That’s the biggest reduction in almost two years, and suggests they expect the ECB deposit rate to stay below zero in five years.

HSBC’s Attfield added that “the new forward guidance criteria for rate hikes would not have been met at any point since 2008,” highlighting the daunting task facing the ECB as it seeks to unwind the record monetary stimulus.

The euro area exited a recession in the second quarter, and headline inflation climbed to 2.2% last month. While intensifying pressures could take the annual CPI rate to more than 3% in coming months, the surge will likely prove temporary and inflation is expected to rapidly decline into the start of 2022, according to Bloomberg Economics’ Maeva Cousin.

Strategists see the German 10-year yield at minus 0.14% by year-end, down from a forecast of minus 0.035% about a month ago, according to a Bloomberg survey. ABN Amro strategist Floortje Merten sees a steeper pullback to minus 0.5%, given the balance between rate expectations and the state of the euro-area economy.

“The further outpricing of rate hikes and the more optimistic sentiment would then be two opposing factors and that could keep Bund yields around these low levels,” Merten said.