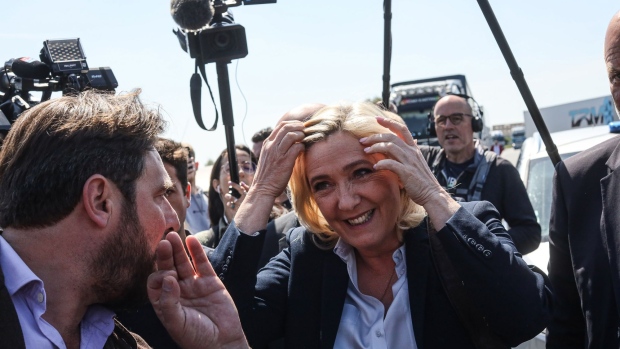 Marine Le Pen, nationalist presidential candidate, prepares to speak to voters during an election campaign event in Royes, France, on Thursday, April 21, 2022. With just four days to go until the French decide between two radically different visions for their future, opinion polls show there are still many undecided voters. , Bloomberg

“A France that defends our common values, in a Europe that we recognize, that is free and open toward the world, sovereign, strong and generous” that is the France in play on April 24 and “we hope that the citizens of the French Republic will chose it,” German Chancellor Olaf Scholz, Spanish Prime Minister Pedro Sanchez and Portuguese Prime Minister Antonio Costa wrote in a joint column published in Le Monde newspaper on Thursday.

European leaders tend to avoid commenting on the elections or domestic affairs of member states. But, said the trio, “the second round of the French presidential election is not, for us, an election like any other. The choice that the French people are facing is crucial for France and for all of us in Europe.”

They described Le Pen as a candidate “who openly sides with those who attack our freedom and democracy.”

While the 53-year-old nationalist has dropped her plan to exit the bloc, she wants to hold a referendum that would make national law prevail over EU rules and restore permanent border checks in the Schengen zone, effectively dismantling the bloc from within. She also wants to slow down cooperation with Germany on defense.

Le Pen’s ties to Russia have also come under closer scrutiny. Back in 2017, Le Pen traveled to Moscow to meet Vladimir Putin. Twelve years ago, her movement received a loan from a Russian company that it’s still repaying, and fears are high that Le Pen would side with Russia’s president if she is elected.

“Populists and the far right in all our countries have made Vladimir Putin an ideological and political model, echoing his nationalist claims,” Scholz, Costa and Sanchez wrote. “We must not forget this, even if these politicians are now trying to distance themselves from the Russian aggressor.”

A polling average calculated by Bloomberg on April 21 showed Macron leading Le Pen 56.2% to 43.8%. That would give him a narrower margin of victory than five years ago. If Le Pen gets more than 40% of the vote, she’d likely emerge empowered while he might have a harder time implementing his reform agenda, depending on how parliamentary elections turn out in June.