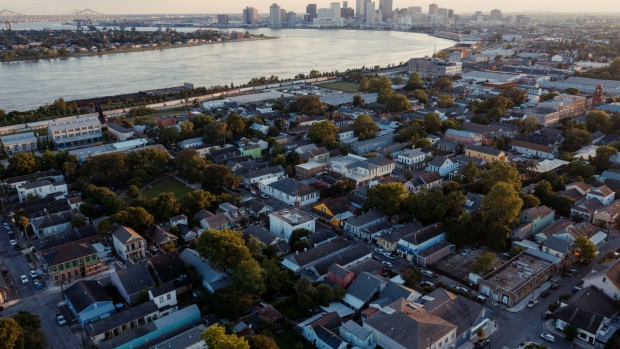 Tropical Storm Ida is growing into a major hurricane that’s heading almost directly at New Orleans on the anniversary of Katrina.

Ida’s top winds could reach 115 miles (185 kilometers) per hour as it comes ashore, probably Sunday night, as a Category 3, major hurricane, on the five-step Saffir Simpson scale, said Don Keeney, a meteorologist with the commercial forecaster Maxar. Small towns on the Gulf coast have already started telling residents to flee and New Orleans is giving away free sandbags so residents can bolster their homes.

“It looks pretty bad,” Keeney said. “The official track is just west of New Orleans, which would be bad for New Orleans.”

On its current track, the storm could cause as much as US$25 billion in damage and losses, said Chuck Watson, a disaster modeler with Enki Research. It will be the most powerful storm to hit the U.S. so far this year

The ninth storm of the 2021 Atlantic hurricane season, Ida’s top winds have increased to 60 miles per hour as it swirled in the Caribbean about 75 miles north-northwest of the Grand Cayman island. It’s forecast to strike Cuba on Friday, reach hurricane strength over the gulf Saturday, and make landfall on the Gulf Coast late Sunday or Monday.

Oil and gas prices gained after energy majors shut down assets and evacuated workers. Sunday will be 16 years to the day since Katrina wreaked havoc in the gulf and devastated New Orleans as a major hurricane.

“Sunday is the anniversary of Katrina -- it seems like a particularly cruel date for a hurricane landfall in Louisiana,” Ryan Truchelut, president of Weather Tiger LLC, said in an interview.

Hurricane watches have been issued from Cameron in Louisiana to the Mississippi/Alabama border, an area that includes New Orleans. Storm surge watches have been issued from Sabine Pass in Louisiana to the Alabama/Florida border. Tropical systems in the northern hemisphere pack more punch on their the east sides, so if Ida strikes west of New Orleans it could push a massive storm surge into Lake Pontchartrain and up the Mississippi River. That would test the flood protection systems that were built after Katrina.

Louisiana Governor John Bel Edwards declared a state of emergency ahead of the storm, according to a Twitter post.

New Orleans, often referred to as NOLA, is below sea level and depends on levees and pumps to keep the ocean and river out. Ida could push ocean levels as high as 11 feet (3.4 meters) in places as it comes ashore.

The potential for damage depends on exactly where the storm hits, how that affects the storm surge in Lake Pontchartrain and whether that pushes the water level over the levees, said Watson.

“NOLA is always a place that things can go wrong quickly and badly,” he said.

Five storms have already hit the U.S. in 2021 as climate change fuels extreme weather around the globe. Wildfires are threatening Lake Tahoe, California, and have forced the Boundary Waters Canoe Area Wilderness in Minnesota to close for the first time since 1976. Blazes are raging across southern Europe, including in Italy, Spain, Greece and Turkey. Flooding and mudslides killed at least 20 people this week in Venezuela. July was the hottest month on record.

Oil and gas companies are bracing for the storm, and have already halted production of more than 1.2 million barrels a day of oil equivalent. Shell is shutting assets in the area, while BP Plc said it’s evacuating workers from four platforms and also curbing output. Equinor ASA is preparing to evacuate its offshore Titan platform. Exxon’s Baton Rouge refinery is beginning its hurricane preparedness process, and Chevron Corp. is clearing non-essential workers from the region.

The Gulf is home to 16 per cent of U.S. crude production, 2 per cent of its natural gas output, and 48 per cent of the nation’s refining capacity. Katrina hit Louisiana and Mississippi on Aug. 29, 2005 as a major hurricane, and the storm went on to cause massive flooding in New Orleans that devastated the city and killed at least 1,800 people.

“The combination of a dangerous storm surge and the tide will cause normally dry areas near the coast to be flooded by rising waters moving inland from the shoreline,” the National Hurricane Center said.

Hurricanes thrive on warm water and Ida’s projected track takes is across parts of the Gulf with surface temperatures in the high 80s Fahrenheit (low 30 to 32 Celsius). The storm could also sweep over the so-called Loop Current, which has some of the warmest and deepest water in the region. That means it could get even stronger than the current forecast of Category 3.

“All the way to the coastline it has a lot of high-octane fuel,” said Weather Tiger’s Truchelut.

Ida is expected to produce total rainfall accumulations of 6 inches (15 centimeters) to 10 inches, with maximum totals of 15 inches across Jamaica.  Rainfall totals of 8 to 12 inches with isolated maximums of 20 inches are expected across the Cayman Islands and western Cuba, including the Isle of Youth.  “These rainfall amounts may produce life-threatening flash floods and mudslides,” the center said.

After Ida comes ashore it could flood cotton, corn and soybean fields in the lower and central Mississippi Delta region, Keeney said. To the north, the storm’s rains could benefit some farms that have needed water.

The hurricane center is also tracking two other weather systems: one east of Bermuda has a 50 per cent chance of becoming a storm in the next two days, and another between Africa and the Caribbean that has a 60 per cent chance.

In the Pacific, the center is also monitoring Tropical Storm Nora that’s set to become a Category 1 hurricane and slam into Baja California near the resort city of Cabo San Lucas next week.