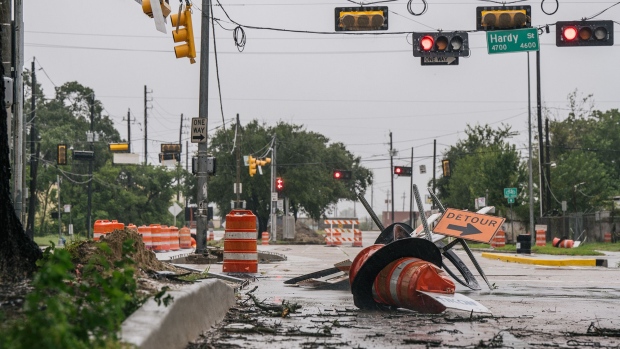 (Bloomberg) -- Why is Tropical Storm Nicholas such a heavy rainmaker? Blame its speed, or rather, its lack thereof.

The storm is moving so slowly that a typical jogger could outrun it. Its lumbering pace of about six miles per hour is combining with the tremendous amount of moisture in the warm waters of the Gulf of Mexico to produce the deluge, said Charles Roeseler, a meteorologist with the National Weather Service in the Houston/Galveston office.

The weather system is basically stuck over the Houston area as it drops almost 10 inches (25 centimeters) of rain and swells the bayou that flows through the city by more than 11 feet. The torrential downpour could drag on for days in the Gulf Coast region, knocking out power and unleashing floods.

Meanwhile, winds out of the east are increasing water levels in the city.

“With an east wind you get elevated tide levels,” he said. “The water that’s trying to exit the area through rivers and bayous can’t flow as quickly.”

Another factor that led to the heavy rainfall for the Houston area was that the storm initially developed over a large part of the Gulf Coast on Sunday and then consolidated over a smaller area, according to Randy Adkins, a senior meteorologist at Accuweather. If that consolidation hadn’t happened, Nicholas would have instead dropped 2 to 4 inches over a larger portion of Texas.

Adkins added that the storm is now drenching Louisiana with 4 to 8 inches expected across that state, Alabama and Mississippi. “Unfortunately, some of these areas that were hit by Hurricane Ida are going to see renewed flooding again,” he said.