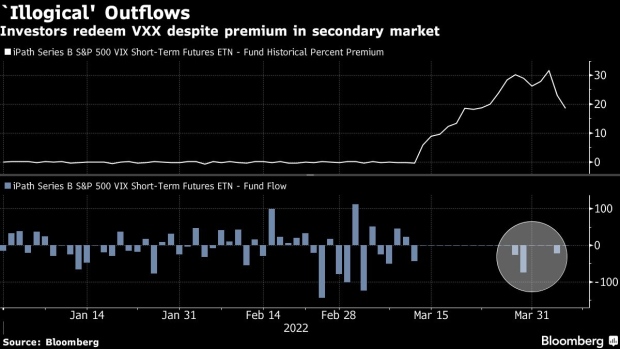 Temporary signage for Barclays Plc bank branch hangs outside a building being renovated in London, U.K., on Tuesday, March 21, 2017. Barclays is considering Dublin for their EU base to ensure continued access to the single market, said people familiar with the plans,asking not to be named because the plans aren't public. Photographer: Luke MacGregor/Bloomberg , Bloomberg

(Bloomberg) -- Ever since Barclays Plc halted sales and issuance of a popular stock-volatility product last month, it’s traded at a large premium to its underlying assets due to the sudden lack of supply.

But unexpectedly the exchange-traded note known as VXX has seen 20% of its shares redeemed since March 28 -- instead of being sold in the open market at a higher price.

The $124 million outflow is the latest twist for a once-popular trade on Wall Street that’s been plunged into chaos by a blunder from the U.K. bank in managing its multi-billion dollar structured-note business.

In a headscratcher for volatility professionals, data from Tuesday appeared to show a trader, or a cohort of traders, cashed out of the iPath Series B S&P 500 VIX Short-Term Futures ETN by some $23 million -- one of three days of withdrawals in the past two weeks.

While ETNs trade a lot like their cousins, exchange-traded funds, they’re actually debt securities. Investors can redeem them directly with the issuer, usually in large blocks, for their “indicative value” of their assets.

So while VXX closed at a 23% premium on Tuesday, a redemption doesn’t price that in -- meaning exiting investors could have received a lot more for their shares by selling them to other traders in the open market.

Things were even more extreme last week, with more than $100 million of redemptions while the ETN was at a 30% premium, according to data compiled by Bloomberg.

“It’s illogical to see outflows, or redemptions, from a fund that is trading at a 30% premium,” said James Seyffart, ETF analyst at Bloomberg Intelligence.

One theory holds that the bank itself is somehow unwinding some exposure by buying notes and then redeeming them.

“It’s possible the redemption is from Barclays helping an investor exit a position or a short, and the bank took the hit as a way to show good will,” said Eric Balchunas at BI.

A spokesperson for Barclays declined to comment on what’s behind the exits.

VXX was used heavily by short sellers and had a thriving options market, meaning there’s still demand for the securities.

However volumes have dropped dramatically, which may have persuaded some holders it was easier to exit altogether rather than attempt to sell into thin trading on the open market. Or they may have bought in at a lower level, making a redemption at the current asset value less painful.

Whatever the cause, it’s the latest sign of market inefficiency in a series of unexplained events surrounding the bank’s note business.

Two weeks after pausing sales and issuance of VXX and a second product, the iPath Pure Beta Crude Oil ETN (OIL), on March 14, Barclays revealed it had mistakenly issued about $15 billion more structured and exchange-traded notes than it had permission for. The error means the lender is offering to buy back affected securities, with early estimates on the hit to Barclays put at almost $600 million.

Vance Harwood of consultancy Six Figure Investing speculated that exiting ETN investors may be counting on a repurchase by Barclays to cover any losses they incur in redemption.

“If someone has VXX shares that are eligible for Barclays rescission offer, if they sell at a loss then Barclays would likely be on the hook, to not only make up the loss, but pay interest on the loss too,” he said by email.

The latest data show VXX closed Thursday at a premium of 20% to its assets.