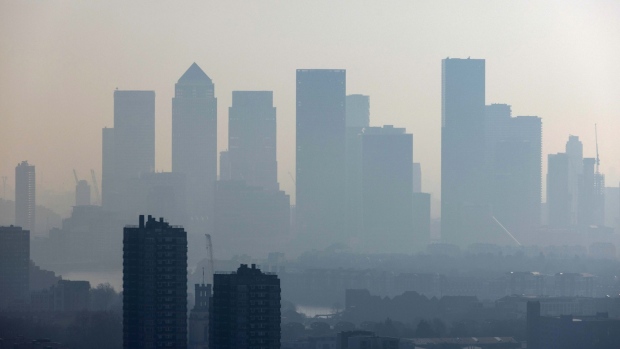 Skyscrapers in the Canary Wharf business, shopping and financial district on the skyline in London, U.K., on Monday, March 21, 2022. The U.K. is expanding the Financial Conduct Authority’s powers in a package of post-Brexit changes to the way it regulates the City of London. Photographer: Chris Ratcliffe/Bloomberg , Bloomberg

(Bloomberg) -- Streetteam Software Ltd., the parent company of travel-and-events startup Pollen, is restructuring after attempts to find a buyer collapsed in the wake of its failure to pay vendors and employees.

“The management team have been in ongoing negotiations with a potential buyer for the parent company but have been unable to agree to terms in an appropriate time frame, leaving the board and shareholders agreeing the best option is to restructure the business,” Streetteam said Tuesday in a statement. The closely held London-based company said it hired Kroll LLC to “administer its restructuring.”

Goldman Sachs Group Inc. had been leading the effort to sell the company, according to an email from co-founder and Chief Executive Officer Callum Negus-Fancey to employees that was reviewed by Bloomberg.

“I am sorry that I wasn’t able to close a deal in which we sold the business in its entirety and kept the whole company together,” Negus-Fancey wrote.

Streetteam has received bids for its consumer-facing subsidiary companies, including Pollen, but its college travel business will become independent from the destination travel and experiences unit, according to the email.

The startup, founded in 2014 by Negus-Fancey and his brother, Liam, works with promoters and music festivals such as Live Nation and Electric Zoo to provide curated experiences combining music, travel and other activities. A typical offering could be a four-day music festival in Malta headlined by American rapper 50 Cent, or a two-day wilderness experience in the Alps led by a former special-forces sniper.

The company attributed its woes to a number of factors, including Covid-19 restrictions in the countries it operates, the downturn global economic conditions and bearish sentiment among startup investors, which combined, “put too much pressure on the business whilst at a critical stage of a startup’s maturity,” according to the statement.

Negus-Fancey attributed the inability to find a buyer for the whole business to a drop in M&A activity, the economic environment and the company’s unprofitability not making it “a big enough priority to buy in this climate,” even by suitors who had previously offered more money.

Pollen has drawn the scorn of customers who have been jilted by canceled events and long wait times for refunds, when they come at all. Tuesday marked another failed event with the cancellation of Drumcode, a festival in Malta planned next month.

“Over recent weeks it has become clear that Pollen’s arrangements for customers and venue safety, suitable staffing for financial management do not met the requirements of the high quality events we take pride in delivering,” the festival’s promoters wrote on Instagram, adding that a lack of communication from the company “left the delivery of the event compromised.”

Pollen announced $150 million in new financing earlier this spring from investors such as Northzone and Lansdowne Partners.