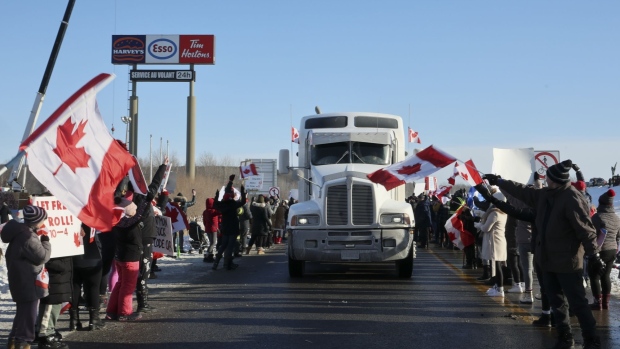 A man poses for a photo with one of many trucks parked along Wellington St. ahead of a demonstration in Ottawa, Ontario, Canada, on Friday, Jan. 28, 2022. A convoy of aggrieved truckers who have become a global cause celebre for opponents of vaccine mandates rolled into Canada's capital this weekend, putting the nation on tenterhooks amid heightened worries the protest could lead to clashes with police. , Bloomberg

(Bloomberg) -- A convoy of truckers and others who oppose vaccine mandates began rolling into Ottawa on Friday, putting Canada’s capital city on edge amid warnings from police that they don’t know how large the protests will get.

The demonstrators have been hailed as heroes by anti-vaccine groups on mainstream and alternative social media platforms. On Twitter, a search by Bloomberg News found posts amplifying the activities of the convoy in Arabic, Dutch, German and Spanish. Facebook groups and pages about the trucker convoy have grown to tens of thousands of users.

“The demonstrations this weekend will be unique, fluid, risky, and significant,” Ottawa Police Chief Peter Sloly said at a news conference on Friday. He said it’s unclear just how many vehicles are coming, what the protesters intend to do while they’re in Ottawa, and how long the demonstration will last.

The initial motivation for the protest was a new rule requiring truckers to show proof of vaccination when entering Canada, which Prime Minister Justin Trudeau’s government implemented on Jan. 15. Until then, truckers had been allowed to cross the U.S.-Canada border with few restrictions. The U.S. imposed a similar mandate on Jan. 22.

But the protest has morphed into a catch-all movement of people angry at public health restrictions meant to control the spread of Covid-19. A crowd-funding campaign has hauled in more than C$7 million ($5.5 million) through Go Fund Me to support the truckers.

Canada is not immune to violence but, with few exceptions, protests tend to be orderly affairs. Convoy organizers have pledged to cooperate and be peaceful. Police have expressed concern the protests could attract violent actors seeking to provoke law enforcement.

“These demonstrations are national in scope. They’re massive in scale,” Sloly said. “Unfortunately, they’re polarizing in nature and they come almost two full years into a highly stressful and tragic global pandemic.”

As of 4 p.m. Ottawa time on Friday, trucks had begun to circle and blast their horns in the district around Canada’s Parliament buildings, with more due to arrive during the weekend. Traffic was snarled in the area due to all the vehicles and road closures, and many office buildings had a increased security presence and locked their doors early.

Reports from local news outlets and police suggest the protest could be in the range of 1,000 to 2,000 vehicles, including pickup trucks and SUVs, along with semi-trailer trucks. Even a few hundred large vehicles would be enough to bring gridlock to Ottawa’s core. The city of just over one million is a two-hour drive west of Montreal and about a seven-hour drive north from New York City.

At least some of the organizers of the convoy appear to have motivations that go well beyond relaxing health restrictions or loosening vaccine rules. One group, called Canada Unity, produced a manifesto calling on Governor General Mary Simon, Queen Elizabeth II’s representative in the country, to topple Trudeau’s government.

Trudeau, who is currently isolating after being exposed to Covid, disparaged the convoy during a press conference on Wednesday.

“The small fringe minority of people who are on their way to Ottawa, or who are holding unacceptable views that they’re expressing, do not represent the views of Canadians,” Trudeau said.

Canadian voters tend to be broadly supportive of vaccine mandates. About two-thirds agree with the idea of mandatory vaccination for all who are eligible, according to an Ipsos poll done for television outlet Global News.

So far, the prime minister has shown no sign of backing down on the vaccine mandate. About 78% of Canada’s population, and 82% of those eligible for the shots, has had at least two doses of a Covid vaccine.

Conservative Leader Erin O’Toole, who heads the largest opposition party, has attempted to walk a cautious line of embracing the cause of truckers, while seeking to distance himself from some of the more contentious elements of the movement. Other Conservative Party lawmakers in his caucus have been forthright in championing the protest.