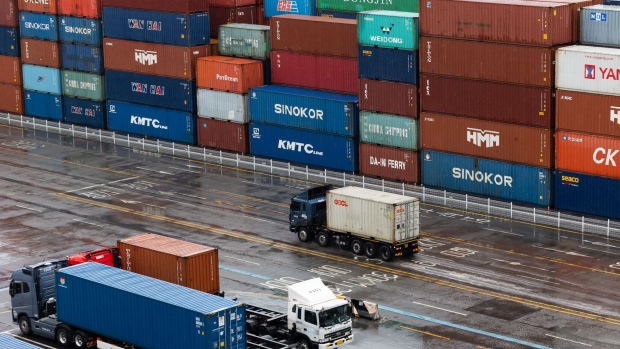 (Bloomberg) -- Truck drivers are on strike in South Korea for the second time in less than a year, targeting major ports in a bid to disrupt key exports from autos to petrochemicals.

The strike began Thursday morning, with demonstrations at 16 sites across the country. The union, which represents 25,000 workers, didn’t disclose details of the work actions in a statement Wednesday, but a representative earlier this week said it planned to block all ports in the country.

The work stoppage threatens a repeat of the union’s actions in June, when protests caused production disruptions costing about 1.6 trillion won ($1.2 billion). Auto, petrochemical, steel and other key industries were hit as companies from Posco Holdings Inc. to Hyundai Motor Co. curbed output.

The protests are the latest instance of global supply-chain workers showing discontent as food and energy costs soar following Russia’s invasion of Ukraine. Wages of transportation workers have been stagnant, putting unions under pressure to press for pay rises, said Russell Lansbury, emeritus professor at the University of Sydney’s business school.

The Biden administration is currently seeking to avoid a strike of US rail workers that could create major supply-chain disruptions just before Christmas.

A lengthy dispute in South Korea may have ripple effects across the globe, as the country is the largest exporter of memory chips and is home to some of the world’s biggest car companies. However, the impact may be more muted for some industries amid weaker global demand for steel and other raw materials.

The strike also puts more pressure on President Yoon Suk Yeol, who is trying to keep the country’s economy on track as rising energy prices spur inflation, while the slowdown in global growth curbs exports. The Bank of Korea opted for a small rise in interest rates on Thursday as it seeks to minimize pressure on the economy while keeping inflation in check.

Truckers are protesting a lack of progress on wage demands after months of negotiations following the previous strike. The union is trying to expand and extend a system that calculates minimum wage based on operating costs, helping to alleviate the impact of soaring fuel prices.

The union said in its statement that the government is failing on negotiations, and is favoring cargo owners rather than expanding the plan to others including drivers of petroleum and grain trucks.

The Ministry of Land, Infrastructure and Transport said earlier this week that the government is seeking a three-year extension on the wage system. It is preparing a contingency plan to minimize the impact of the strike on industries, and said any illegal activity to block shipments would be “strictly handled.”

Some companies made preparations in advance of the strike, securing as many parts and raw materials as possible.

A spokesperson for Hyundai Motor said logistics and vehicle production at its Ulsan plant remain unaffected so far, but the company is monitoring the situation closely. A representative for refiner SK Innovation Co. said complexes in Ulsan and Incheon are operating under normal conditions and ships are moving as scheduled.

Posco said the strike may cause serious disruptions to restoration work at its Pohang steel plant, which sustained damage from flooding in September. The company is hoping the union will allow trucks to come in and out for the repair work.

--With assistance from Sohee Kim and Sharon Cho.

(Updates with professor’s comments in fifth paragraph and responses from companies in last three paragraphs.)