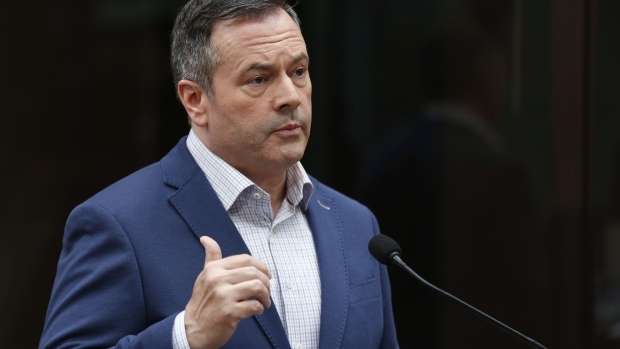 Supporters hold signs as a convoy of trucks passes on the highway in Rigaud, Quebec, Canada, on Friday, Jan. 28, 2022. A "freedom convoy" of Canadian truckers and other activists is on their way to Ottawa to protest the country's vaccine mandates and other Covid-19 control measures. , Bloomberg

About 60 million households in the U.S. have ordered at-home Covid-19 tests from the federal government after President Joe Biden made them available for free to ease shortages fueled by the omicron variant.

The U.S. and Canadian governments should reinstate a vaccine exemption for cross-border truckers to ease supply chain snarls, Alberta Premier Jason Kenney said as a protest convoy arrived in the Canadian capital.

A drug developed by Merck & Co. showed activity against omicron in six laboratory studies, raising confidence in the ability of the new therapy to battle the variant.

Myanmar reported the nation’s first local transmission of omicron variant on Friday, as 72 new cases were detected in Tamu and Kalay townships near the border with India, according to the Ministry of Health.

“Given that local transmission of omicron began here, people are required to strictly follow Covid rules and get vaccinated without fail,” said Khin Khin Gyi, director of emerging infectious disease at the Central Epidemiology Unit.

Authorities locked down a city near the Indian border after more than 150 Covid cases were reported over the past week, local media reported, without specifying the variant.

New infections in Connecticut fell to the lowest in six weeks, reflecting an easing of the omicron variant’s surge in many parts of the U.S., according to data compiled by Johns Hopkins University and Bloomberg. Hospitalized patients declined by about 6%, according to Governor Ned Lamont.

The state health department on Friday reported almost 2,700 new cases among the population of 3.6 million, the fewest since Dec. 17.

The U.S. and Canadian governments should reinstate a vaccine exemption for cross-border truckers to ease supply chain snarls, Alberta Premier Jason Kenney said as a protest convoy arrived in the Canadian capital.

Kenney, speaking Friday in Washington ahead of a meeting of U.S. governors, said he believes cross-border truckers are a low risk to spread Covid-19. The rules, imposed this month by both nations, will further fuel inflation and constrain shipping, he warned.

Alberta is “calling on the two federal governments to simply exercise a bit of common sense,” Kenney said in an interview with Bloomberg Television and BNN Bloomberg.

About 60 million households in the U.S. have ordered at-home Covid-19 tests from the federal government after President Joe Biden made them available for free to ease shortages fueled by the omicron variant.

White House spokeswoman Karine Jean-Pierre announced the figure on Friday. “Tens of millions” of tests have been shipped out, she said.

The Biden administration hasn’t said how many tests it has so far received for delivery to households, though many have begun arriving to homes around the country.

An omicron subvariant appears to be even more contagious than the original fast-spreading strain, U.K. health authorities said, though vaccine booster shots remain an effective shield.

Data from contact tracing showed the subvariant, BA.2, spread more frequently in households, the U.K. Health Security Agency said on Friday. Its rate of transmission among household contacts was 13.4%, compared to 10.3% for omicron. Though the data is a good indication of how transmissible the subvariant is, the agency cautioned that it’s preliminary and could fluctuate.

New York City’s student enrollment has shrunk to its lowest point in at least a decade as the largest U.S. public-school system contends with staff shortages, low attendance rates and ever-changing Covid protocols.

Although the number of kids attending the city’s public schools has declined for six consecutive years, the pandemic accelerated the trend. In the 2021-22 school year, 870,000 pre-K to 12th grade students were enrolled in New York City public schools, a 5% drop from the year before and a 10% decrease since 2019, according to data released this week from the New York State Education Department.

An estimated 15% of inmates in Wyoming’s state prisons are suffering from Covid-19, based on data for this week and last, the Casper Star-Tribune reports.

More than 300 cases were identified this week, including among prison staff, the most in a single week since the pandemic started in 2020, data show.

Attorney General Jason Miyares said in an advisory opinion to Governor Glenn Youngkin that the General Assembly could have added Covid-19 to the list of diseases requiring vaccination, like mumps or tetanus. “It has not done so,” he wrote.

The Republican governor issued executive orders banning mask mandates for public schools and repealing vaccine mandates for public employees when he took office this month. Public universities in Virginia rolled back vaccine requirements for staff but kept them in place for students on campus.

A Florida man’s family lost a bid to compel Jacksonville’s Mayo Clinic to treat their Covid-19 infected loved one with a drug regimen that includes ivermectin, as state law doesn’t provide a right for a particular treatment, a state appeals court said.

Daniel Pisano’s family argued that Mayo Clinic Florida’s refusal to accept an outside doctor’s prescription for treating him interfered with their right to direct his care, the Florida District Court of Appeal, First District said.

But a Florida probate rule giving patients or their families a procedure to assert their right to choose or reject medical treatment doesn’t include the right to demand a particular treatment, the court said in an opinion explaining an earlier expedited ruling.

Zimbabwe reduced night curfew by three and a half hours as daily infections in the southern African country decline.

Curfew hours now last between midnight until 5:30 a.m., from 9 p.m. to 6 a.m. previously, acting health minister Amon Murwira said in an emailed statement, Friday. Daily infections as of Thursday were 153, down from the pandemic peak of 4,031 on Dec. 7. The country will no longer quarantine vaccinated travelers, and schools will open on Feb. 7.

Switzerland could discuss next week the end of quarantine for people who have been in contact with an infected person, as well as ending the work-from-home requirement, Interior Minister Alain Berset told reporters.

While new infections remain near record levels, the omicron variant isn’t impacting hospitals as much as previous waves.

Iceland will gradually remove prevention measures, aiming to end all curbs within six to eight weeks.

The cap on gatherings will be extended to 50 people from 10 from Saturday and rules for restaurants, sports and stage performance will also be relaxed, Prime Minister Katrin Jakobsdottir said at news conference on Friday.

The U.K. will start rolling out distribution of Pfizer’s pill to the most vulnerable people next month in a move that could potentially save thousands of lives and help ease pressure on hospitals, the government said.

On Feb. 10, people with weakened immune systems can begin to get access to the therapy, which reduced the risk of hospitalization or death by 88% in clinical trials.

In a series of executive orders unwinding restrictions put in place earlier this month amid a spike in omicron cases, the U.S. territory also lifted a midnight ban on alcohol sales and will allow restaurants, theaters and events to increase their capacity.

The independent studies from the U.S. and five European countries studied the impact of Merck’s molnupiravir and other antivirals against variants of concern including omicron, Merck and partner Ridgeback Biotherapeutics LP said Friday in a statement.

Governments must do all they can to keep schools open during the wave of amid omicron infections to avoid disruptions to children’s education, Henrietta Fore, the executive director of UNICEF, said.

Germany’s seven-day rate of infections rose to a record 1,073 per 100,000 people. For the time being, hospitals are not coming under the same pressure as in previous waves.

The nation reported 190,148 new cases, compared with a record 203,136 the day before, according to the country’s public health authority RKI. Health Minister Karl Lauterbach expects the latest wave to peak in mid-February.

The pandemic will probably continue to challenge the health-care system next winter, the chief of Germany’s intensive-care monitoring system warned, saying that doctors must be prepared to identify patients who will be at high risk.