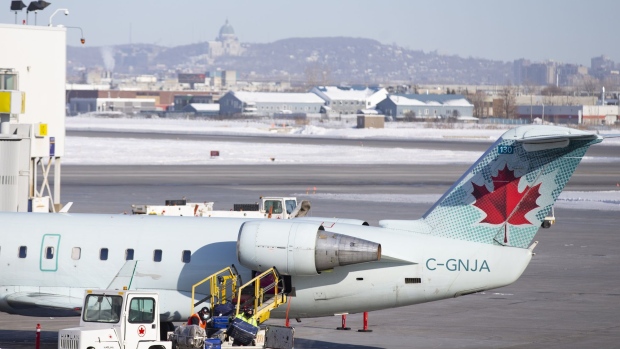 Workers remove luggage from an Air Canada plane on the tarmac at Montreal-Pierre Elliott Trudeau International Airport (YUL) in Montreal, Quebec, Canada, on Sunday, Jan. 31, 2021. Canada's largest airlines have agreed to suspend flights to the Caribbean and Mexico for three months while international travelers will also be tested on arrival, and will be forced to quarantine at designated hotels to await results. , Bloomberg

(Bloomberg) -- Canada has agreed to a multi-billion dollar aid package for Air Canada and parts of the aviation sector, in an announcement coming later on Monday, according to multiple media reports.

Deputy Finance Minister Michael Sabia has finalized a package that’s expected to be a mix of low-cost loans and wage subsidies, with restrictions related to executive compensation, according to the Globe and Mail, citing three unnamed sources. The package will ensure key regional routes are kept, it said. The Canadian Broadcasting Corp. and CTV News also reported a deal has been struck.

Canada’s government has been slow to join other major economies in providing financial help to an industry battered by the pandemic and foreign travel restrictions that have only been getting tougher. Air Canada had repeatedly complained that its home country was the only Group of Seven member without an aid plan.

WestJet Airlines Ltd. isn’t included in the package but talks are ongoing with the airline, the Globe and Mail said. Parts of this package are expected to be extended to other airlines, the newspaper said.

As of March 18, government financing for the airline industry globally, including loans and equity stakes in exchange for cash, has totaled more than $183 billion, according to Ishka, an aviation finance and investment consultancy.

To date, Canada’s most visible lifeline to the industry was a combined C$375 million ($298 million) in emergency loans to Sunwing Airlines Inc. and Sunwing Vacations Inc. Canadian airlines have also been receiving wage subsidies available to all employers.