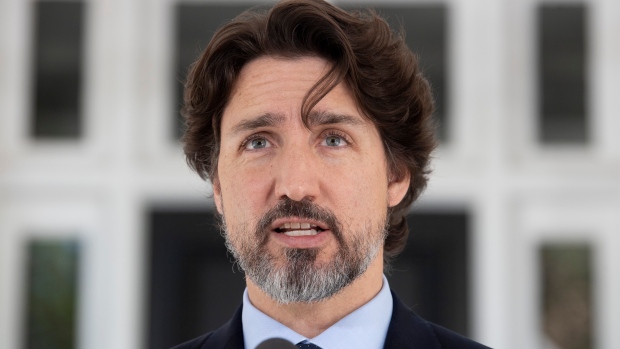 The conference came as Canada is competing for one of two non-permanent seats on the UN Security Council next month against Norway and Ireland. Canada is running on a platform of trying to help rebuild the post-pandemic world.

Trudeau co-hosted the meeting with UN Secretary-General Antonio Guterres and Jamaican Prime Minister Andrew Holness, and opened the hours-long videoconference by affirming support for the international institutions that need to lead the recovery.

"And for the global economy to recover, and for our domestic economies to bounce back, we need a global, co-ordinated plan," Trudeau said.

"Our citizens need to have confidence in international institutions that leave no one behind and are capable of overcoming global challenges."

More than 50 heads of state and government participated, including Germany's Angela Merkel, France's Emmanuel Macron, and Britain's Boris Johnson, along with representatives of the World Bank, the International Monetary Fund and the private sector.

U.S. President Donald Trump did not take part. Trump has argued that wise leaders put the interests of their own countries first.

One by one, Merkel, Macron, Johnson and the president of the European Commission, as well as the prime ministers of Norway and Ireland -- among others -- thrashed Trump's go-it-alone approach without mentioning his name. They defended the World Health Organization, which Trump has defunded, and the Paris agreement on climate change, from which Trump is withdrawing.

Merkel reminded the gathering that Germany has trumpeted climate change during its past G7 presidency. Trump is hosting the G7 summit this year.

European Commission President Ursula von der Leyen noted the pandemic might push some countries to focus on their own needs.

"This is wrong. We have to work together, and for each other."

Macron, who has never shied away from criticizing Trump, said the "collective action" of the world's multilateral system is crucial.

"No single country can find a solution to this crisis. There can be no isolated solution. We have to address issues collectively, such as health, the environment, justice," said Macron.

"The price is paid by all; the solution must be found by all."

Johnson, sometimes viewed a kindred political spirit of Trump's, said all countries are striving to protect their people, as they should. But he added: "Yet no single country hold the keys to victory against our invisible enemy. If we are to defeat COVID-19, achieve a global recovery, and avoid a future pandemic, then we must work together across borders."

Ireland and Norway, Canada's rivals for the two temporary seats on the security council, echoed the sentiment.

"This is no time to seek confrontation and to look inward," said Norway's Prime Minister Erna Solberg.

"Let us use this moment to ensure more global co-operation in order to build back a healthier, greener, fairer, gender-equal and sustainable world."

The subtext of the looming Security Council vote was also on display. Trudeau has been courting the support of various large voting blocs in Africa, Asia and the Caribbean because European countries are expected to rally around Norway and Ireland.

Barbadian Prime Minister Mia Mottley, the current chair of the 20-country Caribbean Community, thanked Trudeau for his remarks, but laid down a clear marker for him and others.

"I hope that this high-level session will not simply be the record of glorious speeches but will trigger action that is needed badly."

Unless countries come together now to co-ordinate a recovery plan, the UN estimates the pandemic could slash nearly US$8.5 trillion from the world economy over the next two years, forcing 34.3 million people into extreme poverty this year and potentially 130 million more over the course of the decade.

"This is our chance to begin a conversation on how we can emerge from this truly global crisis as a stronger and more cohesive world -- one that creates growth for everyone, addresses inequality, and cares for the most vulnerable," Trudeau said Thursday.

"Canada is ready to do our part, as we help bring the world together in the fight against COVID-19."

In a release about the event, the UN said all countries face economic strain due to the pandemic, particularly developing countries which were already in "debt distress" before the crisis and can't afford to cushion the blow for their citizens or to undertake fiscal stimulus measures.

The conference is addressing "six urgent areas of action" to mobilize the financing needed for a global recovery.

Those six areas include:

The conference aims to create a discussion group in each of the six areas, with the goal of providing concrete proposals by mid-July.

"Despite all the technological and scientific advances of recent decades, we are in an unprecedented human crisis because of a microscopic virus," said Guterres.

"We need to respond with unity and solidarity."