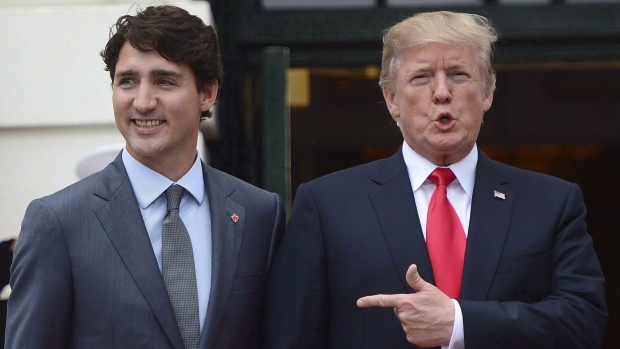 Prime Minister Justin Trudeau is greeted by U.S. President Donald Trump as he arrives at the White House in Washington, D.C., on October 11, 2017. , THE CANADIAN PRESS/Sean Kilpatrick

WASHINGTON -- Prime Minister Justin Trudeau spoke by phone with President Donald Trump on a day the United States revealed it might use the threat of tariffs as a negotiating tactic to force a quick NAFTA deal.

On Monday, Trump explicitly linked the fear of tariffs on steel and aluminum to the ongoing negotiation of NAFTA, then his trade czar elaborated: Robert Lighthizer said the U.S. is in a hurry to get an immediate NAFTA deal, and if it happens quickly Canada and Mexico just might avoid tariffs.

"We're not backing down. ... Right now, 100 per cent (chance we proceed with tariffs)," Trump said Monday in the Oval Office.

"But it could be a part of NAFTA."

Trump also tweeted that steel and aluminum tariffs would only come off if a new NAFTA is signed, suggesting the tariffs might morph into a leverage play to squeeze Canada and Mexico in the trade negotiations.

The Canadian prime minister called Trump in the evening.

Sources described the conversation as cordial, and said Trudeau told the president that he shares a desire to conclude a NAFTA agreement. The Canadian government disputes the characterization of some in the U.S. that it has been obstinate at the negotiating table.

But Trudeau described the tariff threat as unhelpful. Trump is threatening to announce them within a week, in the thick of a congressional election in the steel-producing state of Pennsylvania that Republicans fear losing.

"The prime minister ... registered his serious concern about the U.S. administration's proposed tariffs," said a Canadian statement on the call.

"He emphasized that the introduction of tariffs would not be helpful to reaching a deal on NAFTA."

Events Monday raised the prospect of a pressure-cooker of a negotiation over the coming months, with the twin ingredients of a tariff fight and trade talks being potentially tossed together into one sizzling political stew.

The recipe came together in Mexico City.

At the close of a round of NAFTA talks, the U.S. trade czar told American media that it might take a while for the tariffs to kick in, so, if Canada and Mexico agree to a new NAFTA soon, they might be able to escape tariffs before they take effect.

Lighthizer expressed an unprecedented urgency to get a deal.

He cited four impending political developments as reason to hurry. First, there's the July election in Mexico, where a leftist candidate is leading the presidential polls. Then there are provincial elections in Quebec and Ontario. The U.S. has midterm congressional races in November.

But he also referred obliquely to a fourth concern looming in the political backdrop. For months, Republicans in Washington have been quietly expressing fear their party will lose seats in Congress, or perhaps even lose power entirely, resulting in a more protectionist, progressive legislature with the ability to block any ratification vote.

Lighthizer didn't put it that explicitly. For the first time, however, he made public his hope of renegotiating NAFTA, of completing the legally required consultations and of proceeding to a ratification vote before a new Congress gets sworn in next January.

That would mean completing the deal within weeks, at a breakneck pace. American trade law requires a six-month consultation period with congressional committees as one of several processes before any final vote.

"Now our time is running very short," Lighthizer said at an event to close a round of talks in Mexico City, standing beside his colleagues Chrystia Freeland and Ildefonso Guajardo.

"I fear that the longer we proceed, the more political headwinds we will feel. ... We must resolve our outstanding issues soon to maintain the possibility of having this measure be considered by the current Congress."

He said he's willing to ramp up the negotiating pace to make it happen. He listed the major U.S. priorities as new rules for auto parts, more Buy American-friendly public procurement policies, and provisions that keep jobs on American soil.

There's something else he's willing to do -- split negotiations in three. "We would prefer a three-way, tripartite agreement," Lighthizer said. "If that proves impossible, we are prepared to move on a bilateral basis if agreement can be made."

Canada sees benefit in a quick agreement, as a balm to soothe investor worry.

But it won't commit to being forced into one on a sped-up timetable. Foreign Affairs Minister Chrystia Freeland said Monday that the Canadian position remains as it was from the beginning, which is to work in good faith for the amount of time it takes to get a good deal.

"We absolutely would like to get a deal done. At the same time, we believe in working hard for a good deal, not just any deal," she told reporters in Mexico.

Adding to the uncertainty, the latest plot-twist risked undermining the entire U.S. legal justification for tariffs: that foreign metals present a national-security risk to the U.S.

Washington trade consultant Eric Miller said the president may have now created a paper trail damaging his own case -- by publicly suggesting that he viewed the exercise as a negotiating ploy.

It's impossible to predict how long this uncertainty will last, said Miller: for years as a permanent tariff, months as a negotiating tactic or just a few days before it unceremoniously evaporates under the heat of domesticopposition.

"It's a mess," said Miller, of the Rideau Potomac Strategy Group.

Trump faces unusually fierce opposition from his own party.

While Republicans in Washington tend to shy away from fights with the president, this time they're escalating the feud. The top figure in the House of Representatives, Paul Ryan, began the day by issuing a press release blaming the tariff talk for dips in the stock market.