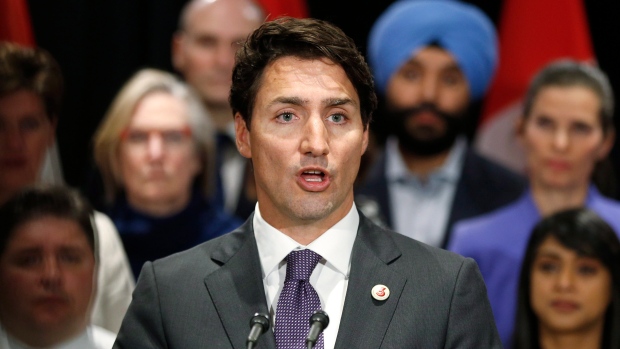 Prime Minister Justin Trudeau answers questions at a news conference with his cabinet after their Liberal cabinet retreat in Calgary , The Canadian Press

President Donald Trump moved to advance construction of the Keystone XL and Dakota Access oil pipelines Tuesday, a pair of projects that were blocked by the Obama administration due in part to environmental concerns.

Trump also signed a notice requiring the materials for the pipelines to be constructed in the United States, though it was unclear how he planned to enforce the measure.

Trump also added that both orders are subject to renegotiations of the agreements.

"It’s subject to renegotiation of terms by us. We’re going to renegotiate some of the terms. And if they’d like, we’ll see if we can get that pipeline built.”

Prime Minister Justin Trudeau expressed his support for the project at a Tuesday afternoon press conference.

Providing both a wrap on his two-day cabinet summit and his thoughts on Trump's executive orders, the PM said: "I've been on the record for many years supporting it because it means economic growth and good jobs for Albertans."

"In both the conversations I've had with President Trump now Keystone XL came up as a topic and I reiterated my support for the project," he added.

Trudeau also said that Canada's plans to protect the environment, which include Alberta's absolute cap on oilsands emissions, mean that "we can get our resources to market safely and responsibly while meeting our climate change goals."

The decision was well-received by Saskatchewan Premier Brad Wall.

"We welcome President Trump’s approval of the Keystone XL pipeline," Wall said Tuesday in a statement. "This is a win for both our countries’ energy industries, for energy consumers and for energy security."

Members of Justin Trudeau's cabinet welcomed the news, while maintaining that the project can find a balance between the economy and the environment.

"I'm very glad the prime minister and the cabinet are here, because this decision will result in many, many jobs for Albertans."

An order signed by Trump invited pipeline-maker TransCanada Corp. (TRP.TO) to re-submit an application for a permit. It also encourages U.S. federal regulatory agencies to respond the opposite way the Obama administration did: quickly, and favourably.

TransCanada followed up on the order, declaring its intent to reapply for a permit shortly after Trump's orders were announced.

"There's an energy revolution that's gonna happen in this country. In spite of the bureaucratic and political barriers that have happened in the past, we're ready to move forward."

Looking ahead, Trump announced that he planned to nominate a justice for the Supreme Court next week, moving swiftly to try to fill the seat left vacant by the death of Justice Antonin Scalia. The president was summoning top senators to the White House later Tuesday to discuss his upcoming nomination.

Trump has sought to focus his first full week in office on jobs and the economy. Republicans, as well as some unions, have cited the pipeline projects as prime opportunities for job growth.

Former president Barack Obama stopped the proposed Keystone XL pipeline in late 2015, declaring it would have undercut U.S. efforts to clinch a global climate change deal that was a centerpiece of his environmental legacy. The pipeline would run from Canada to Nebraska where it would connect to existing lines running to U.S. refineries on the Gulf Coast. The U.S. government needs to approve the pipeline because it would cross the nation's northern border.

Separately, late last year, the Army Corps of Engineers declined to allow construction of the Dakota Access pipeline under Lake Oahe, saying alternative routes needed to be considered. The Standing Rock Sioux tribe and its supporters say the project threatens drinking water and Native American sites, though Energy Transfer Partners, the company that wants to build the pipeline, disputes that and says the pipeline will be safe.

The pipeline is to carry North Dakota oil through South Dakota and Iowa to a shipping point in Illinois.

Within hours came word of a protest planned for later Tuesday outside the White House, a clear foreshadowing of the political fight that looms.

Keystone XL would carry more than one-fifth of the oil Canada exports to the United States, taking it to the already-built southern leg that connects with major refineries on the Gulf of Mexico.

Americans have a stake in the project too. The pipeline would include some oil picked up in the northern U.S., and it would also share resource royalties with a string of communities along the route, increasing some counties' annual revenues more than half.

Canada's oil exports have continued flowing, even without that pipeline.

The amount of Canadian oil sent to the U.S. has increased more than 60 per cent since TransCanada Corp. first applied for a permit in 2008. Those exports have largely rolled into the U.S. on trains.

An organizer of the first national protests, Bill McKibben, explained in a 2015 interview why he fought to stop the pipeline: To complicate development of the oilsands, in the hope of speeding up the global shift to clean energy.

"We can't bankrupt the fossil-fuel industry," McKibben said at the time. "But we can begin to politically bankrupt them -- and we're trying."

- With files from BNN.ca and The Canadian Press 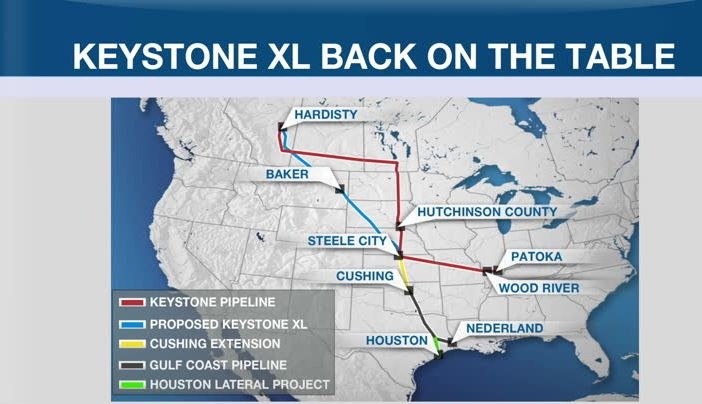