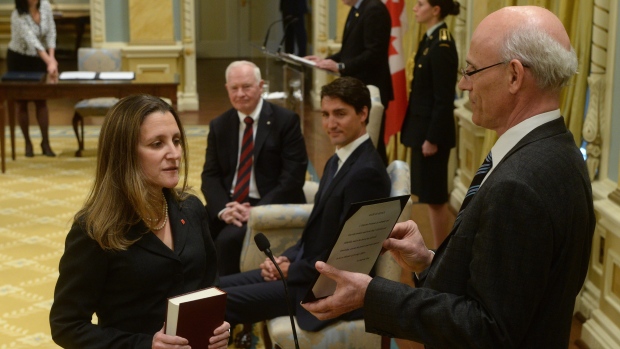 Chrystia Freeland is sworn in as Minister of Foreign Affairs as Prime Minister Justin Trudeau and Gov.-Gen. David Johnston look on during a ceremony at Rideau Hall in Ottawa, Tuesday, Jan.10, 2017. , The Canadian Press

OTTAWA -- Justin Trudeau made cabinet cornerstone Chrystia Freeland his new foreign affairs minister and promoted a trio of up-and-coming MPs on Tuesday as part of an inner-circle shakeup aimed in part at preparing for a Donald Trump presidency.

Freeland, a former economics journalist with extensive contacts in the United States, leaves the trade portfolio to replace veteran Liberal MP Stephane Dion, who announced Tuesday that he plans to leave active politics.

Ahmed Hussen, a Somali-born rookie MP first elected in 2015, is one of several new faces in cabinet that include Quebec MP Francois-Philippe Champagne, named international trade minister, and Karina Gould of Burlington, Ont., who takes Democratic Institutions from Maryam Monsef.

Patty Hajdu, a strong performer who shone as status of women minister, is taking over the labour portfolio from MaryAnn Mihychuk, who is being dumped from cabinet altogether.

Monsef -- widely criticized for her handling of Trudeau's promise to reform Canada's voting system -- is moving to replace Hajdu at Status of Women.

Hussen is taking over the immigration portfolio from John McCallum, who is also quitting politics in order to become ambassador to China.

The fact that there was no immediate indication of a similar posting for Dion made clear that the ex-foreign affairs minister and one-time federal Liberal leader has been left at loose ends by the changes.

"Over the last 21 years, I have devoted myself to my riding, to my fellow citizens, to Quebec, to all of Canada, to the role that we must play in the world, and to the Liberal Party of Canada," Dion said in a statement.

"I have enjoyed political life, especially when I was able to make a difference to benefit my fellow citizens. I emerge full of energy ... renewable! But politics is not the only way to serve one's country. Fortunately!"

Dion's tenure at Foreign Affairs has been a rocky one, marred by controversy over his approval of a $15-billion arms deal with Saudi Arabia. His prickly demeanour was also seen as ill-suited to dealing with the unpredictable Trump, who has demonstrated a tendency to easily take offence.

Tuesday's announcement paid special tribute to Dion but would only say Trudeau looks forward to his "wisdom and his tireless service" in "the next chapter of Mr. Dion's contributions to our country.

Trump, whose inauguration takes place Jan. 20, has vowed to adopt an unapologetically protectionist, America-first policy on trade, including re-opening or even tearing up the North American Free Trade Agreement.

Trudeau also paid tribute to McCallum, calling his work in the immigration portfolio on behalf of Syrian refugees "an inspiration to Canadians and an example to the world."

News of the shuffle leaked out Monday, just as the Prime Minister's Office confirmed that Trudeau's two top aides, Katie Telford and Gerald Butts, have been meeting with some of Trump's senior advisers, building bridges to the incoming administration. 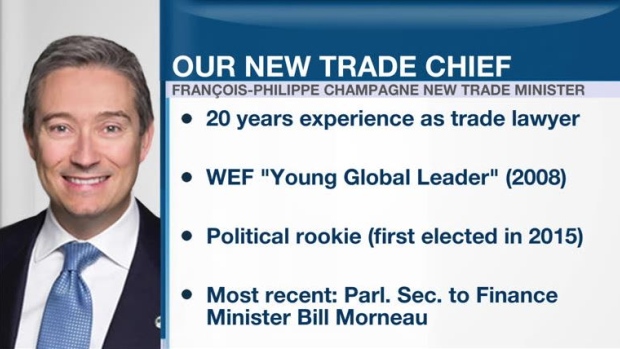 In his first cabinet of 30 ministers, Trudeau famously appointed an equal number of men and women "because it's 2015." That parity was upset last fall when Hunter Tootoo resigned from cabinet and the Liberal caucus in order to seek treatment for alcohol addiction following what he later admitted was an inappropriate relationship with a female staffer.

With the addition of Gould, Hussen and Champagne, Tuesday's shuffle restores that gender balance.

This week's shuffle may well be a prelude to another reset expected midway through Trudeau's first mandate. Insiders expect a major realignment this summer, with a cabinet shuffle followed by a throne speech to kick off the second half of the mandate.