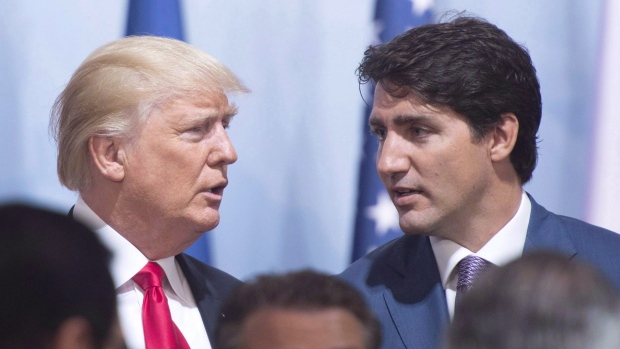 WASHINGTON - Prime Minister Justin Trudeau says he's hopeful that Canada can resolve its tariff dispute with the United States by the end of the month.

That's when leaders of the G20, including Trudeau and U.S. President Donald Trump, will gather for their annual meeting, which is taking place this year in Buenos Aires.

According to media reports, that's also when the two countries aim to join Mexico for a signing ceremony celebrating the U.S.-Mexico-Canada Agreement, replacing NAFTA.

Speaking today at a news conference in Paris, Trudeau says he brought up the tariff dispute with Trump when the pair spoke briefly at a dinner Friday hosted by French President Emmanuel Macron.

He says the ongoing U.S. tariffs on foreign exports of steel and aluminum remain a source of concern for both Canadians and Americans alike.

David MacNaughton, Canada's ambassador to the U.S., said in an interview last week that some high-level talks have taken place, and that he has extended an invitation to U.S. trade czar Robert Lighthizer to formally resume the effort to get the tariffs lifted.