Prime Minister Justin Trudeau is expected to officially kick off Canada’s election campaign Wednesday, with polls showing his Liberals locked in a tight race with the opposition Conservative Party ahead of the Oct. 21 vote.

Trudeau is set to meet with Governor General Julie Payette, Queen Elizabeth II’s representative in Canada, at 10 a.m. to request the dissolution of parliament, according to an itinerary from the prime minister’s office. It would mark the formal start of campaigning.

Neither of the two main parties is currently polling high enough -- both are just north of 30% -- to win a majority of the 338 seats up for grabs, meaning the next Parliament could be more fragmented than the current one. The Liberals enter the election with 177 seats, compared with 95 for the Conservatives. A majority requires winning at least 170 seats.

The result will determine whether Trudeau, 47, can cement one of the most left-leaning agendas the country has seen in at least a generation -- progressive on social issues, willing to run deficits to tackle income disparities, assertive on climate change and fervently internationalist in an era of populism. It’s a record that prompted former U.S. Vice President Joe Biden to hail Trudeau as one of the last main standard-bearers of liberalism.

Yet despite Trudeau’s focus on income distribution, the country has struggled to create wealth during his tenure. Labor productivity and real wage gains continue to hover around historically weak levels, leaving the economy increasingly reliant on immigration to generate growth.

In the eyes of the business community, Trudeau hasn’t devoted serious attention to fixing Canada’s long-standing competitiveness challenges. Still, polls suggest his leftist tilt is popular and Trudeau has forged a comfortable lead over Conservative leader Andrew Scheer, 40, on the crucial question of economic stewardship, giving him a critical advantage in his bid for re-election. 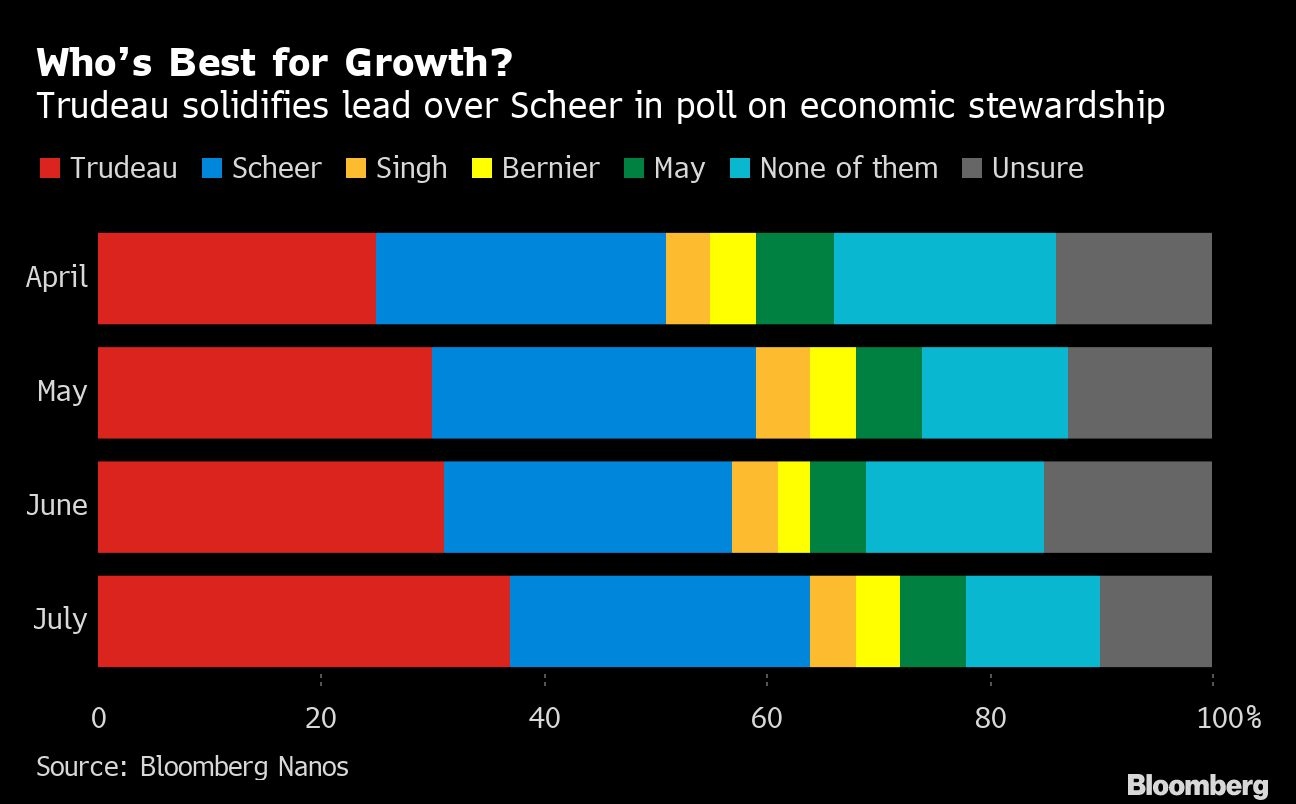 “Trudeau has been unapologetic in shifting what is traditionally Canada’s centrist party to the left,” said Andre Albinati, a principal at Earnscliffe Strategy Group and former adviser to Liberal Prime Minister Paul Martin.

Although the polls show the two main parties are neck and neck, campaigns matter. The 2015 race that brought the Liberals to power also started off tight, with observers speculating the most likely outcome was a minority government, before Trudeau pulled ahead.

While key differences exist between Canada’s two main political parties, they are largely in line on key macroeconomic policy, and default when the chips are down to an “economy first” pragmatism.

That said, one issue where there are stark differences is on how to develop the nation’s vast oil reserves. The Conservative Party portrays itself as a champion of the oil sector and pledges to remove the stricter environmental regulation brought in by Trudeau.

The Liberals, meanwhile, claim they are trying to forge a grand bargain on resources -- be more pro-environment and supportive of indigenous concerns in order to win the “social license” for development. That approach has met with little success so far.

A minority Liberal government that’s propped up by other left-leaning parties is a concerning prospect for many business leaders, because it would be hostile to the country’s energy sector.

This election was supposed to be a cakewalk for Trudeau. Canadians almost never remove a majority government from power after only one term. Scheer, 40, is largely unknown, a stark contrast to the prime minister’s celebrity. And on some key economic metrics -- particularly employment -- the economy has been doing very well.

But Trudeau’s popularity has declined over the past two years, and since February, his party has lost its lead in the polls. His waning fortunes reflect missteps on the world stage -- including an embarrassing state visit to India -- and a domestic scandal involving SNC-Lavalin Group Inc., a construction company headquartered in his hometown of Montreal.

The SNC controversy has been the biggest thorn in Trudeau’s side. He and his staff are accused of pressuring the former attorney-general into ordering prosecutors to settle a corruption case that dates back to the engineering firm’s work in Moammar Qaddafi’s Libya. Trudeau says he did nothing wrong and was only attempting to protect jobs, but the scandal cost him two high-profile cabinet ministers -- both women.

The story has reignited criticism of his Liberal Party as overly cozy with big business, and the case has taken a toll on Trudeau’s progressive credentials. That’s a major hurdle for someone whose key to success will be whether he can rally left-leaning voters, like he did in 2015.