Liberal Party of Canada Leader Justin Trudeau is pledging to hike taxes on the nation’s largest banks and insurers if his party is re-elected on Sept. 20, just as the big banks come out with eye-popping earnings.

In a release Wednesday, Trudeau announced that he would increase the corporate tax rate on the big banks and insurance companies by three percentage points – from 15 per cent to 18 per cent –  on all earnings over $1 billion. The Liberal Party leader also unveiled plans to establish a Canada Recovery Dividend to help fund the Liberal Party’s housing plan.

“We have to rebuild a better Canada -- one that works for everyone. That’s why we’re going to ask our largest financial institutions, who have recovered faster and stronger than many other industries, to pay a little more so we can invest in Canadians and help them find a home of their own,” Trudeau said in a release.

The measures would only apply to financial institutions with earnings north of $1 billion. Trudeau said the policies would generate a minimum of $2.5 billion per year over the next four years, and would take effect in 2022-23.

The exact structure of the Canada Recovery Dividend is still in the works. In an email to BNN Bloomberg, Liberal Party Spokesperson Brook Simpson further consultations with the Office of the Superintendent of Financial Institutions would help decide the basis on which the dividend would be calculated, including how to factor in profit, liabilities and other metrics.

The big banks have come storming back from the worst of the pandemic, with Royal Bank of Canada posting a 34 per cent jump in net income in its fiscal third quarter Wednesday. The nation’s largest lender earned nearly $4.3 billion in the quarter, and released more than half a billion dollars that had been set aside for potentially sour loans. 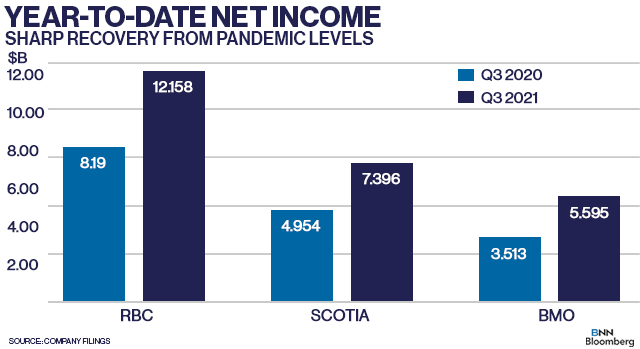 In response to the pledge, the Canadian Bankers Association – an industry group representing about 60 banks that operate in Canada, including the nation’s largest lenders – said the policy pledge would be detrimental to shareholders and took issue with the targeted nature of the tax increase.

“Singling out specific economic sectors for special taxation is a proven detriment to economic growth and has been abandoned as a strategy from previous governments that tried to pursue similarly counterproductive policies. Banks are already among the largest taxpayers in Canada,” the CBA said in a release.

While Trudeau touted the plan as a net benefit to the domestic economy, some members of the investment community are eyeing the move warily. In an interview Wednesday, David Dietze, managing principal and senior portfolio strategist at Peapack Private Wealth, said there could be unintended consequences if the big banks end up passing along their higher costs to consumers.

“If your costs do go up – and taxes are a cost – what are you going to do to make ends meet? You’re probably going to raise prices in connection with extending home mortgages, that means interest rates could bump up. I don’t see how that’s a benefit to those who would want to buy a home in Canada,” he said.

The tax-hike announcement comes one day after the Liberal Party unveiled a housing plan that includes a goal to build 1.4 million homes over the next four years.

BNN BLOOMBERG POLL: Why do you invest in Canadian banks?