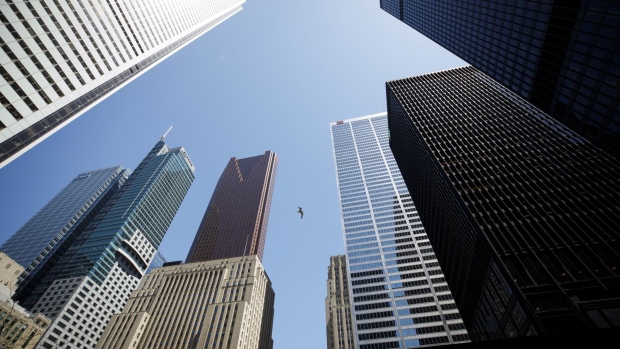 Bank towers stand in the financial district of Toronto. , Bloomberg

(Bloomberg) -- Finance Minister Chrystia Freeland is imposing a one-time windfall levy on Canada’s major banks and permanently increasing their income tax rate, fulfilling an election promise that has raised the ire of the industry’s top executives.

The measures will force banks and insurance companies to pay an additional C$6.1 billion ($4.8 billion) in tax over five years, according to Freeland’s budget plan released Thursday. The new taxes are virtually certain to be implemented because Prime Minister Justin Trudeau has already secured the support of a left-leaning opposition party to pass the budget law.

The government said that massive, government-funded Covid-19 support programs have helped the financial sector recover faster than other parts of the economy, and now it’s time to pay some back.

Trudeau’s plan to hit finance with a larger tax bill has been met sharp criticism from executives, who have said it will take capital away from lending and harm investors’ perception of Canada.

“Not only is the bank tax a knee-jerk reaction that sends the wrong message to the global investment community, it is ultimately a tax on you, our shareholders -- approximately 70% of whom are Canadian,” Bank of Nova Scotia CEO Brian Porter said in remarks prepared for the bank’s annual meeting this week. He didn’t end up delivering the speech because he came down with Covid-19.

The windfall tax of 15% applies to taxable income earned last year by banks and insurers in Canada over C$1 billion. That will force them to pay about C$4.1 billion, sliced into payments from 2022 to 2027, according to budget documents.

But the government did not go quite as far in increasing the banks’ income tax rate as Trudeau had threatened to during last year’s election campaign. The prime minister had pledged to increase the maximum federal income rate for financial institutions to 18% from 15%.

Instead, Freeland is lifting it to 16.5%, but lowering the threshold at which the new rate will apply. That measure will mean about C$2 billion in additional taxes over five years, government estimates show.