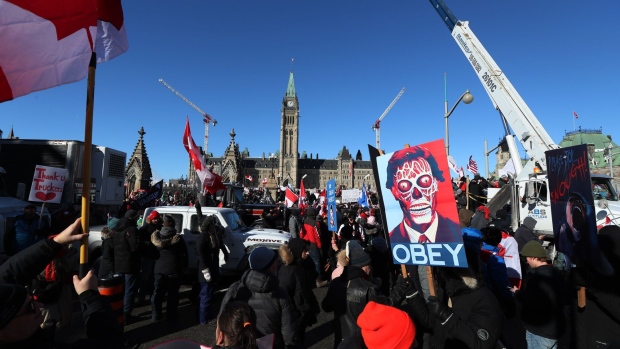 Justin Trudeau, Canada's prime minister, speaks during an event announcing Budget 2022 investments in housing in Hamilton, Ontario, Canada, on Friday, April 8, 2022. The government unveiled a raft of policies designed to make housing more affordable, including moves to curb demand through taxes on speculators, a freeze on home purchases by foreigners, a ban on blind bidding wars, and an ambitious plan to double the pace of new home construction over the next decade. , Bloomberg

(Bloomberg) -- Younger voters were crucial to electing Justin Trudeau as Canada’s prime minister in 2015, but nearly seven years later they’re increasingly turning away from his Liberal Party -- and early signs show the Conservatives may be picking some of them up.

Support for Liberals among Canadians between 18 and 29 years old has averaged 22% over the past three months, trailing both Conservatives and the left-leaning New Democratic Party, according to weekly surveys by Nanos Research. Since 2015, the Liberals have been averaging 34% support in this age group.

Economic issues appear to be a big factor. Younger voters give Trudeau a dismal score on his approach to soaring housing costs: just 12% say the Liberals are the best party to handle that problem, according to a separate Nanos poll conducted for Bloomberg News.

The numbers potentially represent a major shift in Canada’s political landscape. And with younger voters seemingly up for grabs, the discourse is already beginning to change.

Housing affordability and interest rates -- coupled with grievances over Covid-19 lockdown measures that hit young people hardest -- are dominating debate in the Conservative Party, which will choose a new leader in September. The Liberals have also pivoted hard toward housing, making it a top issue in last month’s budget.

Trudeau won in 2015 because young voters “who never voted before showed up at the polls,” Lisa Raitt, a former deputy Conservative leader who now works at the Canadian Imperial Bank of Commerce, said last week at the Bloomberg Canada Capital Markets Forum. These voters now “have a very strong ability to change the fortunes of any political party, and they need to be paid attention to.”

The large margins of error involved with narrowing down polls to specific demographics make it difficult to draw firm conclusions on trends. A lot could also change before the next election, which isn’t expected until 2025 thanks to a power-sharing deal Trudeau struck with the NDP -- partly in exchange for action on housing.

But the situation is a far cry from Trudeau’s first term in office, when the Liberals were completely dominant in support among younger voters.

Beyond housing, the Liberals are also losing ground with these voters when it comes to management of the economy, according to the Nanos survey for Bloomberg. Asked whether they have trust in Trudeau to create the conditions for economic prosperity, voters 18 to 34 gave the prime minister worse marks in 2022, compared to the same question in 2019. Voters 55 and older gave slightly improved marks to the Liberals.

Housing isn’t the sole explanation for the political mood change. The experience of younger voters during the pandemic may also be pushing them away from incumbent governments.

A Jan. 31 poll from the Angus Reid Institute showed that voters under 50 were less likely to support the sweeping restrictions on economic activity and social gatherings meant to prevent the spread of Covid over the past two years. Younger Canadians are also more likely to work in the service sector that saw frequent closures during the pandemic.

People in their 20s and 30s entered the pandemic “with the thinnest resources, both financially and psychologically,” said Gerald Butts, a former top aide to Trudeau who is now vice chairman at the Eurasia Group, a New York-based political risk consultancy.

“We have dislocated a whole generation of people,” Butts said in a telephone interview, adding that he sees these voters more likely to end up adrift than headed into the Conservative camp. “That’s a recipe for long-term disengagement from active citizenship.”

The Liberals, however, should “be worried about the 32-year-old guy in Brampton who’s working at the Amazon fulfillment center, who kept the economy going while the rest of us stayed home and felt like he didn’t have any support anywhere,” Butts said, referring to a Toronto suburb.

Among voters aged 30-39, the Conservatives are averaging 35% over the same period, versus 26% for the Liberals. The New Democrats, too, are doing better than what they’ve polled historically among younger cohorts.

At least one contender for the leadership of the Conservatives is trying to capitalize on that.

The front-runner, 42-year-old Pierre Poilievre, is running a populist campaign on the theme of freedom from the “elite gatekeepers” controlling Canadians’ lives -- a message that appears to be resonating, based on raucous crowds he’s been attracting to his campaign rallies.

“There’s a rise of a kind of folk libertarianism,” said Sean Speer, a former Conservative aide and senior fellow at the University of Toronto’s Munk School of Global Affairs. “It’s kind of instinctual, it’s not cerebral. But it is a rejection of centralized authority, state-imposed lockdowns and all the rest.”