Fewer than half of Canada’s small business owners would support a vaccine passport: CFIB survey

The incumbent leader, whose Liberals have seen their lead over the Conservatives steadily erode since Trudeau called a snap election, said Friday his government would create a $1 billion (US$792 million) proof-of-vaccination fund if returned to power in the Sept. 20 vote.

At a campaign stop in the Toronto suburb of Mississauga, Trudeau cited comments by a top bank economist who warned in a Bloomberg interview a day earlier that if provinces refuse to implement verification systems they face slower growth amid a fourth wave of COVID-19 cases.

Quebec and British Columbia -- the second and third biggest provinces -- are launching systems next month that will require patrons of certain businesses to show proof of inoculation. But Ontario Premier Doug Ford, along with Jason Kenney of oil-rich Alberta, are holdouts on the issue.

“I certainly hope that here in Ontario, Premier Ford steps up,” Trudeau said. “It’s time for him to listen to public health officials.” 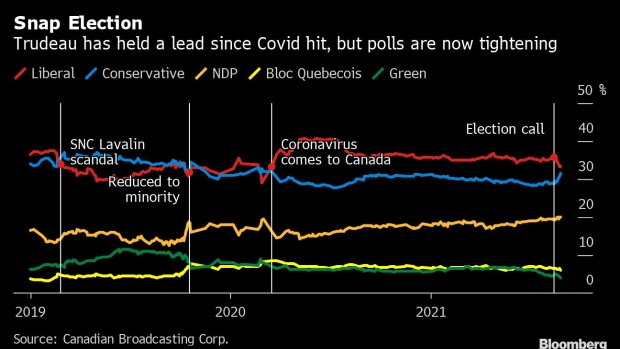 The remarks threaten to end an apparent detente between Trudeau and Ford. The Toronto Star reported last week that, in contrast to the 2019 campaign in which the prime minister lost his parliamentary majority, the federal Liberals and provincial Progressive Conservatives had agreed to keep the peace this time around.

Ford has also told his cabinet ministers not to campaign for Trudeau’s main rival, Conservative Leader Erin O’Toole, according to a Globe and Mail newspaper report earlier this week.

Asked about vaccine passports at a campaign stop in Corner Brook, Newfoundland on Friday, O’Toole said it’s up to provinces to decide what’s best for them and that, if elected, he’d respect those choices.

On Thursday, Toronto-Dominion Bank Chief Economist Beata Caranci said her team could cut its fourth-quarter growth forecasts for Ontario and other provinces that don’t have plans to limit high-risk activities for people who are not vaccinated. That’s because those without vaccine passports are more at risk of having to resort to lockdowns or the re-imposition of restrictions on businesses as COVID case counts rise.

Data in the U.S. has also shown that counties with higher vaccinated populations are having stronger economic growth.

Friday’s remarks on vaccines double down on an issue Trudeau attempted to use as a wedge against the Conservatives in the first week of the campaign.

“A vaccine mandate for non-essential businesses is good idea,” Trudeau said. “It keeps people safe, it encourages everyone to do the right thing, it keeps our businesses open and it keeps our economy rebuilding.”