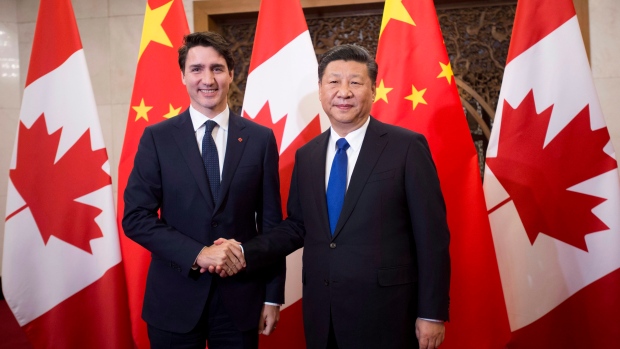 OTTAWA - Prime Minister Justin Trudeau joined counterparts from both sides of the Pacific on Friday to sign a declaration focusing on free trade and digital innovation as a means to economic recovery from the COVID-19 pandemic.

The communique from the Asia-Pacific Economic Co-operation leaders' summit - its first joint statement in three years - sought common ground on the fraught issues of free-flowing commerce and telecommunications networks. It comes amid Canada's tensions with China and the much bigger dispute between Beijing and Washington.

The 21 APEC leaders stressed “co-ordinated action” on the pandemic at the meeting, hosted by Malaysia but held online because of the virus. They extended the sentiment of co-operation to international business, with signatories pledging “free, open, fair, non-discriminatory â€¦ predictable trade.”

The so-called Kuala Lumpur Declaration also underscored “necessary reform” at the World Trade Organization, a process Canada has led among a handful of WTO members known as the Ottawa Group.

Words on a communique alone are unlikely to prompt China to lift restrictions on canola imports from Canada, imposed in March 2019 in apparent retaliation for the arrest of Huawei executive Meng Wanzhou. Meng is facing extradition to the U.S. to face fraud charges in a case that has become a weeping sore in the relationship between Ottawa and Beijing.

The ban on canola shipments from two large Canadian exporters has cost the sector nearly $2 billion so far, the Canola Council of Canada said Friday.

The declaration placed a heavy emphasis on digital innovation, envisioning an “open, accessible and secure” telecommunications environment that would foster digital infrastructure development.

The apparent alignment belies a Western wariness of Chinese telecoms firms such as Huawei, with APEC members Australia and the U.S. banning the tech giant from building 5G wireless networks while pressure ramps up to do likewise in Canada.

On Wednesday, a united federal opposition supported a Conservative motion to insist the Liberal government take a harder line against what it says are national security threats from Beijing as Ottawa mulls whether to allow Huawei to supply equipment for Canada's next-generation 5G networks.

Much of the attention at Friday's meeting centred on Chinese President Xi Jinping and U.S. President Donald Trump. The latter has refused to concede this month's U.S. presidential election to challenger Joe Biden, and has made a point in the past of calling out China on trade and security.

The Trump administration during the last APEC summit in 2018 refused to sign off on a final statement over those same issues. Friday likely marked one of the president's last such international gatherings following the Nov. 3 election.

This year's meeting also comes days after China joined nearly a dozen other Asian countries, plus Australia and New Zealand, in inking what is being billed as the world's largest free-trade agreement, which excludes Canada and the U.S.

Trudeau stopped short Thursday of saying Canada was interested in joining the new Regional Comprehensive Economic Partnership, but instead suggested Ottawa would be watching to see how Beijing behaves in the trade deal.

China “is an important player in the global economy that we need to try and include and get to play by better international rules,” the prime minister said at a question-and-answer session during an APEC side event on Thursday.

“So if the RCEP deal is able to actually start to create level playing fields, that's going to be something very, very interesting. So we're going to watch carefully.”

The APEC meeting Friday will be followed this weekend by the G20 leaders' summit, which is being hosted by Saudi Arabia and will also focus on responding to the economic damage wrought by the pandemic.

While the first G20 leaders' summit held in 2008 was meant to ensure a unified international response to the financial crisis that year, experts say the ensuing 12 years have seen growing polarization around the world along with more populism and instability.

“And unless there is a will on the part of the great powers to co-operate even at a minimum, you're just not going to see a whole lot of action. So yes, you may get a communique. But it's likely to be quite anodyne.”