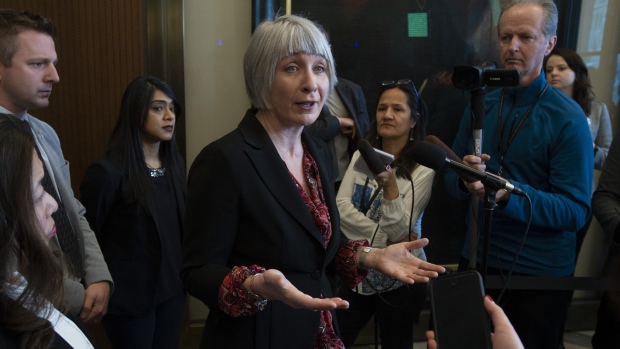 Minister of Small Business and Export Promotion Mary Ng, Liberal MP Francis Drouin, and Government House Leader Bardish Chagger (third from left) look on as Employment, Workforce Development and Labour Minister Patty Hajdu comments on the Ontario budget in the Foyer of the House of Commons in Ottawa, Friday April 12, 2019. , The Canadian Press

OTTAWA -- The federal Liberals are attacking the Ontario Progressive Conservative government's first budget since Doug Ford was elected premier, hoping voters across the country will connect the document's cuts to social spending and the yet-to-be-announced policy leanings of Andrew Scheer's Conservatives.

The provincial budget proposes cuts in post-secondary education and social services, scaling back the growth in spending projected by Ontario's former Liberal government.

Federal Employment Minister Patty Hajdu, an MP from Thunder Bay in northern Ontario, called the budget "reckless" in how it takes a knife to programs that affect everything from social security and job creation to northern development and the province's ability to fight forest fires.

At almost every turn at a news conference Friday, Hajdu told reporters in Ottawa that voters across the country can expect the same kind of "cruel" fiscal slashing from the federal Conservatives under Scheer's leadership, should they choose him to govern the nation in the October election.

"From my perspective, Doug Ford and his cronies are trying to pull a fast one on Ontarians," Hajdu said. "It's quite clear that Andrew Scheer would take exactly the same tactic."

Much as the federal Liberals did in 2015, the Ford government is pledging to balance Ontario's books several years down the road.

Justin Trudeau didn't deliver on his campaign pledge of "modest" deficit spending with a plan to balance the federal budget by 2019. Every year, his government has produced bigger deficits than it promised, and this year's is nearly $20 billion.

Balancing the provincial budget was a key election promise for the Ontario Tories. Finance Minister Vic Fedeli said Thursday he expected the province would eliminate its budget deficit by the 2023-24 fiscal year, two years beyond the end of their term.

Federal Conservative finance critic Pierre Poilievre, who for months has been hounding the Trudeau Liberals to say when the federal books will be balanced, said Friday he understands the Ontario PC government was handed a tenuous fiscal situation by the province's former Liberal government.

With that in mind, the Ford government has taken a responsible approach with a plan to bring deficit spending to an eventual end, Poilievre said.

"They inherited a disastrous financial situation and they've tried to balance fiscal responsibility against the continuing needs of the people while constrained by enormous record debt," he said. "I think they got the balance right."

Under the Ontario budget, program expenses in the province are to rise over three years by an average of 0.8 per cent, compared to the 3.3 per cent in growth that the former Liberal government had projected.

The document talks about fighting climate change "without a carbon tax," but provides no new money for climate programs. It does, however, earmark cash for clean-technology investments that could create jobs in industries producing solar panels, wind turbines and electric vehicle charging stations.

"Canadians want us to take action on things like climate," Hajdu said, denouncing the Ford government's criticism of the federal carbon tax. "They know that their children's health and safety depends on governments that are going to take responsible action."

Hajdu wasn't focused only on the Ford government Friday. She lumped Jason Kenney's Alberta Conservatives together with the Ford government in warning Canadians that they can expect "cuts, cuts, cuts" to spending under a Scheer government similar to those announced in Ontario and proposed in Alberta where Kenney is fighting to unseat his province's NDP government.

"We see the Conservative governments behave the same way no matter where they are elected," said Hajdu.