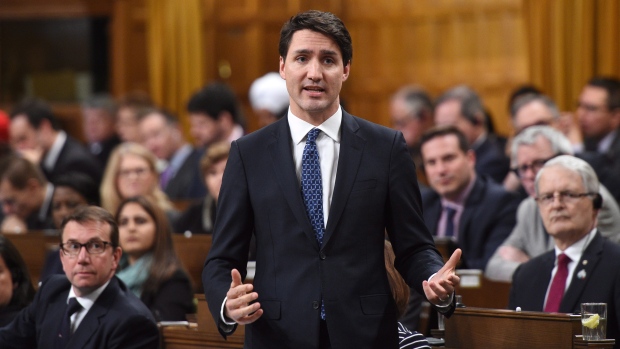 Prime Minister Justin Trudeau responds to a question during question period in the House of Commons on Parliament Hill in Ottawa on Monday, April 3, 2017. , THE CANADIAN PRESS/Sean Kilpatrick

MONTREAL/OTTAWA - Canadian plane and train maker Bombardier Inc tried to contain a public relations debacle on Monday after protests and a dressing down by Prime Minister Justin Trudeau over hefty executive pay hikes just weeks after its latest government loan.

Bombardier (BBDb.TO), which has received more than US$1 billion in federal and provincial government aid since 2015, awarded its top five executives and board chairman raises of up to 50 per cent for 2016.

The pay hikes, disclosed in public filings last week, sparked protests outside Bombardier's Montreal headquarters on Sunday and calls by opposition leaders for a company freeze on executive compensation.

Bombardier retreated on Sunday, saying that more than 50 per cent of the total planned compensation will be deferred until 2020 and will be payable only if the company achieves performance goals. Executive Chairman Pierre Beaudoin also renounced his raise on Friday.

"We didn't do a good job of communicating it," Chief Executive Alain Bellemare told a Quebec radio show on Monday. "If you look at it at face value, I can understand why people were so angry, so unhappy."

The compensation packages for the executives and the board chairman included salary, bonuses and stock options. The company was able to defer part of the raises because the remuneration tied to options is forward dating, a spokesman said on Monday.

Bellemare said the pay was needed to retain top talent.

But Quebec and Canadian government officials said they were not surprised by the public anger against Bombardier, which announced plans in 2016 to lay off more than 14,000 people in the province and globally over two years.

Bombardier, which was forced to consider bankruptcy in 2015 after facing a cash crunch while developing two new planes, received a US$1 billion investment from Quebec in its CSeries 110-130 seat jet program. Last February, it received C$372.5 million in loans from Ottawa.

"They didn't realize what impact it would have on the population and on the elected officials as well," Quebec Economy Minister Dominique Anglade told reporters at a Montreal aviation conference.

A poll by French-language network Quebecor Media showed that 93 percent of Quebecers opposed the raises.

"This should have been managed by Bombardier internally," said a Quebec aviation industry executive, who requested anonymity because of the sensitive nature of the topic. "Quebecers financed a piece of the CSeries, they feel like Bombardier belongs to them. So they were shocked."

Speaking in Parliament on Monday, Trudeau criticized the company's planned compensation hikes for its senior executives.

"We're obviously not pleased with the decision that Bombardier made around its remuneration for its executives," Trudeau said in Parliament. "But we're happy to see them make decisions that are fixing that for Quebecers' and Canadians' confidence."

Trudeau had given a more muted response when pressed on the issue last Thursday, saying: "We respect the free market and choices companies will make, but we also have a responsibility to ensure the investments we make with taxpayers’ dollars are leading to good jobs and growth."

While Bombardier's financial situation has improved since 2015, with the company setting a 2018 breakeven target, the company is still burning cash as it ramps up production of its flagship CSeries jet and works to bring a new business jet, the Global 7000, to market.

"Bombardier is doing a lot better, but they are not out of the woods yet, so they still need the government to be looking at them favorably," said one transportation analyst who spoke on condition of anonymity because he is not authorized to talk to the media.