Prime Minister Justin Trudeau stumbled out of the blocks in the first week of Canada’s snap election campaign, with polls showing the race tightening and prospects for a majority weakening.

While most surveys still give his Liberals a small edge over the main opposition Conservative Party, the advantage has fallen to within the margin of error and one poll even shows the Tories ahead.

Trudeau called the election for Sept. 20 on the premise he needed a mandate to “finish” the job of tackling the COVID-19 crisis and plan for the post-pandemic recovery. Instead, the prime minister has been harangued over what the opposition says is an unnecessary campaign, at a time when the country is being hit by a fourth wave of the virus.

He’s facing criticism over a slow response to evacuating Canada’s interpreters and other support staff out of Afghanistan. And his campaign was sideswiped by an inflation report last week that showed consumer prices increasing at the fastest pace in a decade.

“The Liberals seemed to have limped out of the gates,” David Coletto, chief executive at polling company Abacus Data, said by email. 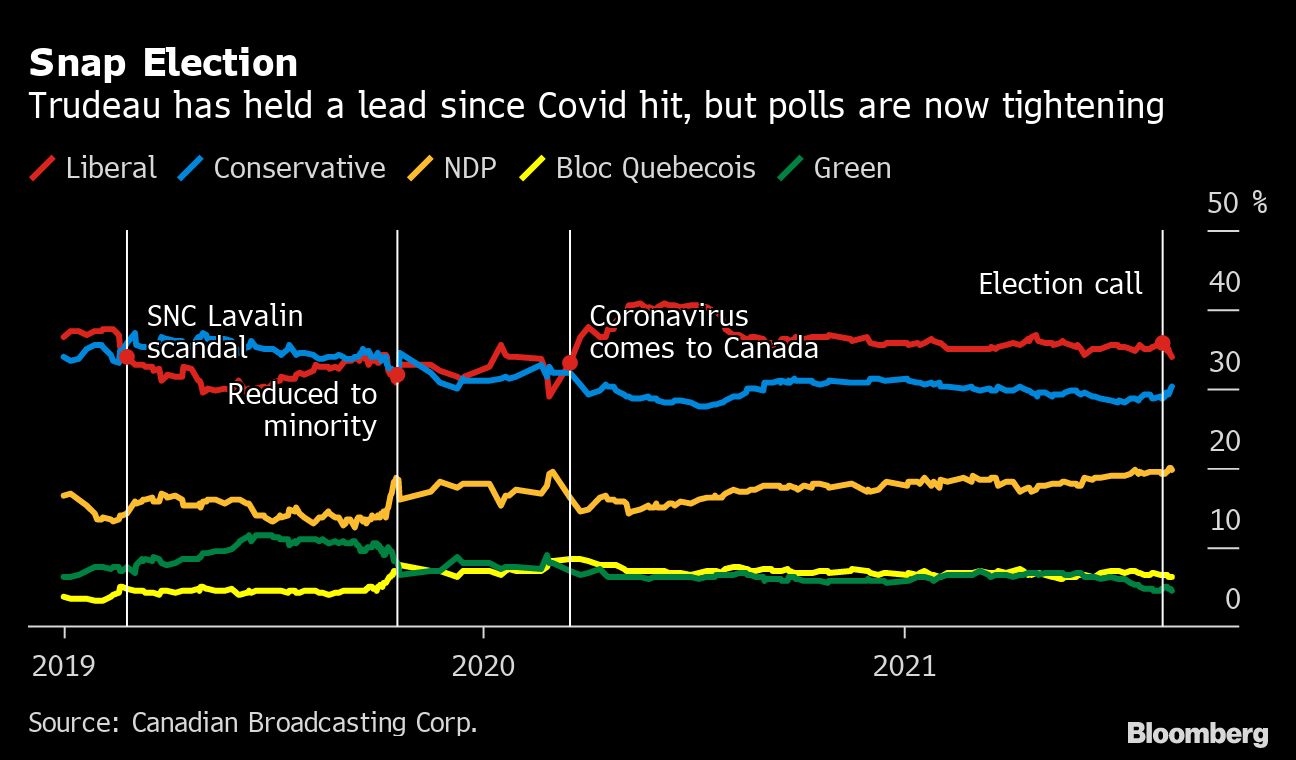 The Liberals have the support of 34 per cent of voters compared to 30.3 per cent for the Conservatives and 19.8 per cent for the left-leaning New Democratic Party, according to national averages compiled by the Canadian Broadcasting Corp. Polling aggregator 338Canada, is now giving Trudeau a 22 per cent chance of winning a majority of seats, down from above 50 per cent at the start of the campaign.

The campaign has already turned negative, driven in large part by Trudeau’s party trying to paint the Conservatives as regressive, which is a tried-and-true strategy for the Liberals early in campaigns. “This election is about a choice: forward or backwards,” the prime minister said Monday at a campaign stop in Halifax, Nova Scotia.

But that too appears to be backfiring. Twitter labeled one video posted by Finance Minister Chrystia Freeland as “manipulated media” on Sunday. It was a video of Conservative Leader Erin O’Toole saying he would be supportive of “for-profit” health care provision that had edited out his full response.

Canada's public, universal health care system is one of our greatest strengths. It's part of what makes us who we are as a country. Last year, as COVID-19 raged, Erin O'Toole was asked if he would bring private, "for-profit" healthcare to Canada. He responded unequivocally: yes. pic.twitter.com/dISRKrIjr0

One wild card for Trudeau is how the fourth wave of COVID-19 will impact the campaign. New daily cases have climbed to more than 2,000 in recent days for the first time since June.

Throughout the pandemic, Trudeau’s polling numbers have been strongest when concerns about the virus have been the most elevated because the Liberal government has gotten high marks on its handling of the pandemic.

On the other hand, rising case numbers may provide more fodder for the opposition to accuse Trudeau of opportunism in calling the election, and could undermine household confidence.

There are signs that Canadians are beginning to worry about the highly transmissible delta variant. Last week, the Bloomberg Nanos Canadian Confidence Index fell to its lowest since early May, even though it remains at historically elevated levels. Expectations about the economic outlook have fallen to their lowest since April.

“I’m also seeing a shift in the mood,” Coletto said. “There’s growing anxiety about the pandemic which doesn’t yet seem to be impacting people’s broader views of their political choices, but it’s something we need to watch carefully.”