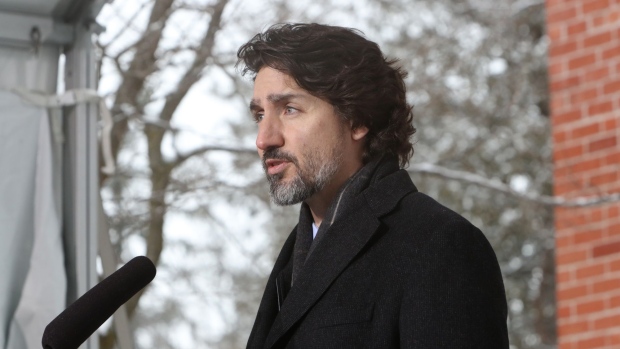 Justin Trudeau speaks outside his Ottawa residence on Feb. 5. , Bloomberg

The moves eliminate a potential drag on growth for Canada’s economy, as many households faced the prospect of having to make large tax payments on last year’s benefits. It also gives Trudeau one less political worry as he considers whether to trigger an election later this year.

More than 8 million people, or 40 per cent of the labor force, received at least one payment from the government’s flagship support program -- the Canada Emergency Response Benefit.

“Right now, I don’t want you to have to worry about what you may owe in taxes,” Trudeau told reporters in Ottawa. “Our priority is to ensure that you and your family get through this pandemic and back on your feet.”

Interest on income taxes will be waived until April 30, 2022, according to a statement released by Canada Revenue Agency. Individuals need to earn less than $75,000 to qualify for the relief.

In the first nine months of 2020, government transfers to Canadian households increased by about $100 billion from 2019. Government officials didn’t provide a cost estimate for the relief.

The announcement comes as Finance Minister Chrystia Freeland prepares her first budget as the country’s finance chief, which is expected in the spring. According to government estimates, Canada’s deficit for the fiscal year ending March 31 will rise to 17.5 per cent of gross domestic product, from 1.7 per cent in 2019.