Justin Trudeau, seeking to rejuvenate his government’s mandate amid an ethics scandal and double digit unemployment, named a new finance minister, suspended all parliamentary business, and promised to return next month with an “ambitious” new spending plan to help drive the recovery.

The Canadian leader prorogued the legislature, a formal act that ends the current parliamentary session, in order to outline a new agenda, which he plans to introduce on Sept. 23.

It was the culmination of a dramatic few days in Ottawa. Earlier Tuesday, Trudeau appointed Chrystia Freeland as the country’s new finance minister after the previous finance chief, Bill Morneau, resigned amid policy differences.

The moves suggest Trudeau isn’t in any rush to reverse the kind of spending that has already driven the nation’s budget gap to 16 per cent of economic output this year -- the highest deficit since World War II. While the pandemic has been devastating, it also offers up an “unprecedented” opportunity for a long term recovery plan and to fill “gaps” in public health and social safety nets exposed by the pandemic, Trudeau told reporters.

“This is our moment to change the future for the better,” the prime minister said. “We can’t afford to miss it because this window of opportunity won’t be open for long.”

In Freeland, Trudeau has found an ally on aggressive fiscal policy, but someone with enough political clout in cabinet to maintain discipline on how the money is spent. The former journalist has arguably been Trudeau’s most successful minister, assigned to some of the government’s toughest files such as negotiating a new North American free trade agreement with President Donald Trump’s administration. Freeland keeps her current role as deputy prime minister. 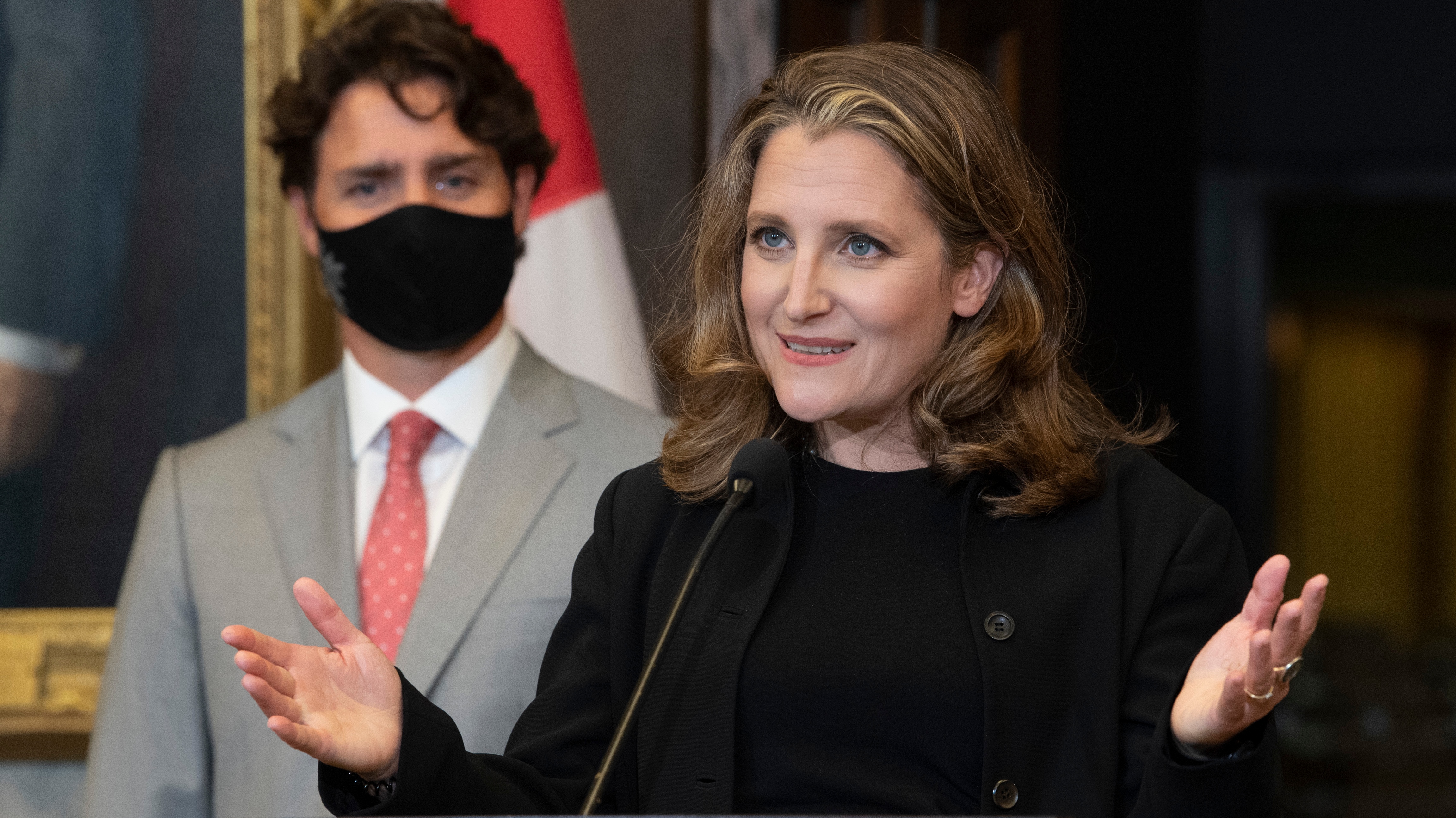 Her appointment was welcomed by economists and business leaders.

She is “a strong choice with seasoned experience on domestic and international policy issues along with a record for forging consensus across different views,” Rebekah Young, an economist at Bank of Nova Scotia, said by email. “Pushing back on further spending requests will be part of the job and she’s been proven to be a tough but effective negotiator.”

Freeland, 52, is the first woman to hold the position and Trudeau’s second finance minister after Morneau, who resigned after nearly five years. She is only the second female finance minister appointed by a Group of Seven country, following Christine Lagarde of France.

The swift change in Canada’s political landscape began with Monday’s resignation of Morneau, amid disputes over what the recovery plan should look like and how ambitious it should be. Advocates close to Trudeau have been pushing for a transformational social and economic agenda to take advantage of historically low interest rates, and some had seen Morneau as too cautious.

Freeland on Tuesday endorsed the idea of an ambitious government plan. “This is a once in a lifetime challenge for our whole country and our commitment as a government is to do whatever it takes to support Canadians as we get through that challenge,” she said at the same press conference. The government wants “to turn this tremendous challenge into a fabulous opportunity for our country.”

Canada is poised to see budget deficits well in excess of the $100 billion for at least one more year. Economists see Canada’s budget gap at about that level in 2021 without new measures. The deficit for the current year is projected at $343 billion -- more than six times the previous all-time record.

“The direction he is taking casts aside what might have alternatively once been emphasis placed upon how to eventually exit from pandemic policies in the quarters and years ahead more in favour of pivoting toward layering on an expansionist strategy,” Derek Holt, head of capital markets economics at Bank of Nova Scotia, said in an email.

The Canadian dollar ended Tuesday up 0.3 per cent against its U.S. counterpart, trading at $1.3168, though it was middle of the pack versus most other major currencies and lost ground after Trudeau began his afternoon press conference. Ten-year government bond yields dropped 2 basis points to 0.56 per cent.

Proroguing Parliament is routine but can be fraught with controversy if it’s seen as a ploy to get out of difficult situations. The suspension gives Trudeau time to work on the reset, but his government has been embroiled in an ethics scandal with multiple parliamentary committees investigating his links to a Toronto charity that was given a government contract.

These will now be shut down. The controversy has eroded Trudeau’s approval ratings, which had previously jumped on the government’s handling of the pandemic.

Trudeau said he will deliver a so-called Throne Speech in on Sept. 23 to outline the parameters of his new agenda, which is expected to include measures to bolster the country’s social safety net, such as revamping unemployment insurance, and more money for green infrastructure.

Without a majority of seats in parliament, he will need the support of at least one of the three opposition parties to press ahead, with the most likely partner being the left-of-center New Democratic Party.