Trudeau’s Liberal Party won 157 of Canada’s 338 electoral districts, losing his majority in parliament and the popular vote, but gaining enough seats to secure a stable government with support from smaller parties. The most likely partner for Trudeau would be the pro-labor New Democratic Party, which won 24 seats, giving the two parties a combined 181.

While his minority position weakens his mandate, the result will nonetheless come as a relief for Trudeau, 47, who entered the campaign wounded by a scandal over his handling of a judicial case for a Quebec engineering firm, and was further rocked by revelations he wore blackface at least three times when he was younger.

Canadians “voted in favour of a progressive agenda and strong action on climate change,” Trudeau said in his victory speech in Montreal. “I have heard you my friends, you are sending our Liberal team back to work, back to Ottawa with a clear mandate.” 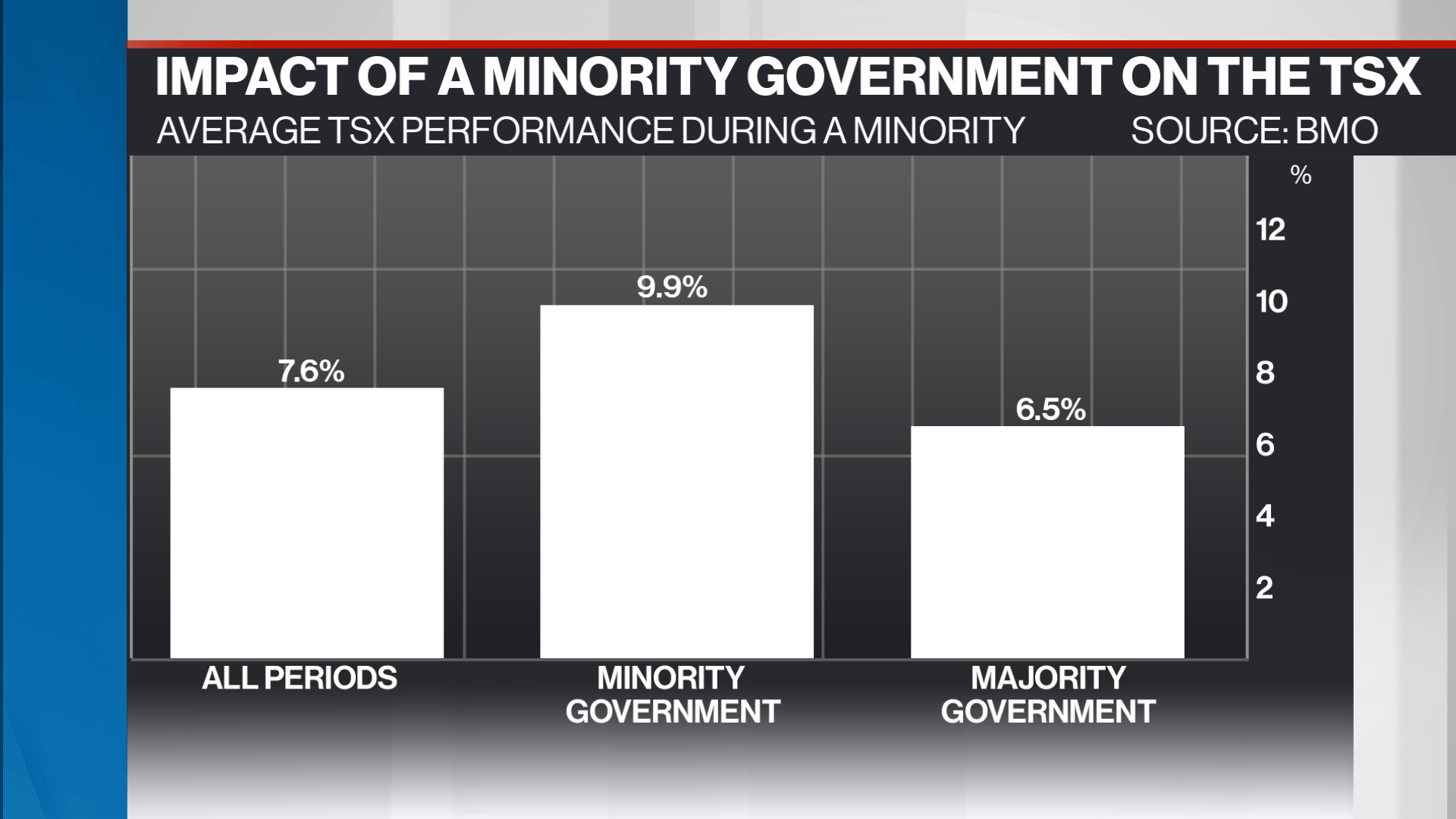 Congratulations to @JustinTrudeau on a wonderful and hard fought victory. Canada is well served. I look forward to working with you toward the betterment of both of our countries!

The second term allows the Liberal leader to cement one of the most left-leaning agendas the country has seen in at least a generation -- progressive on social issues, willing to run deficits to tackle income disparities, assertive on climate change and fervently internationalist in an era of populism. The push to the left would be accelerated if the Liberals are forced to team up with the NDP -- an alliance that will produce some trepidation in Canada’s energy sector, already saddled with reduced oil prices due to pipeline bottlenecks. Trudeau can also turn to other parties for support on a vote-by-vote basis.

Conservative Leader Andrew Scheer cast his result -- raising his seat count by one-quarter from 2015 -- as a victory and said the party would be ready to replace Trudeau when he loses his grip on power. When that would happen is not clear, as NDP Leader Jagmeet Singh’s party won enough seats to back Trudeau in votes and signaled a willingness to do so.

One potential flash point may be the proposed expansion of the Trans Mountain pipeline, which would carry crude from Alberta to a port near Vancouver. Trudeau’s government bought the pipeline last year to save its expansion after the previous owner, Kinder Morgan Inc., threatened to walk away. The NDP is anti-pipeline, and wants more aggressive moves to combat climate change.

Yet, if history is any guide, the Liberals will only need to make moderate concessions to remain in power, without undermining the nation’s finances or key economic objectives, which includes constructing the Trans Mountain expansion that the NDP opposes. The average duration of the last three Canadian minority governments was almost two years.

“While there are some residual political uncertainties, we’re not likely to see dramatic changes from the broad outlines of the Liberal platform, or for that matter, even from where policies were headed prior to the vote,” Avery Shenfeld, chief economist at Canadian Imperial Bank of Commerce, said in a note to investors. 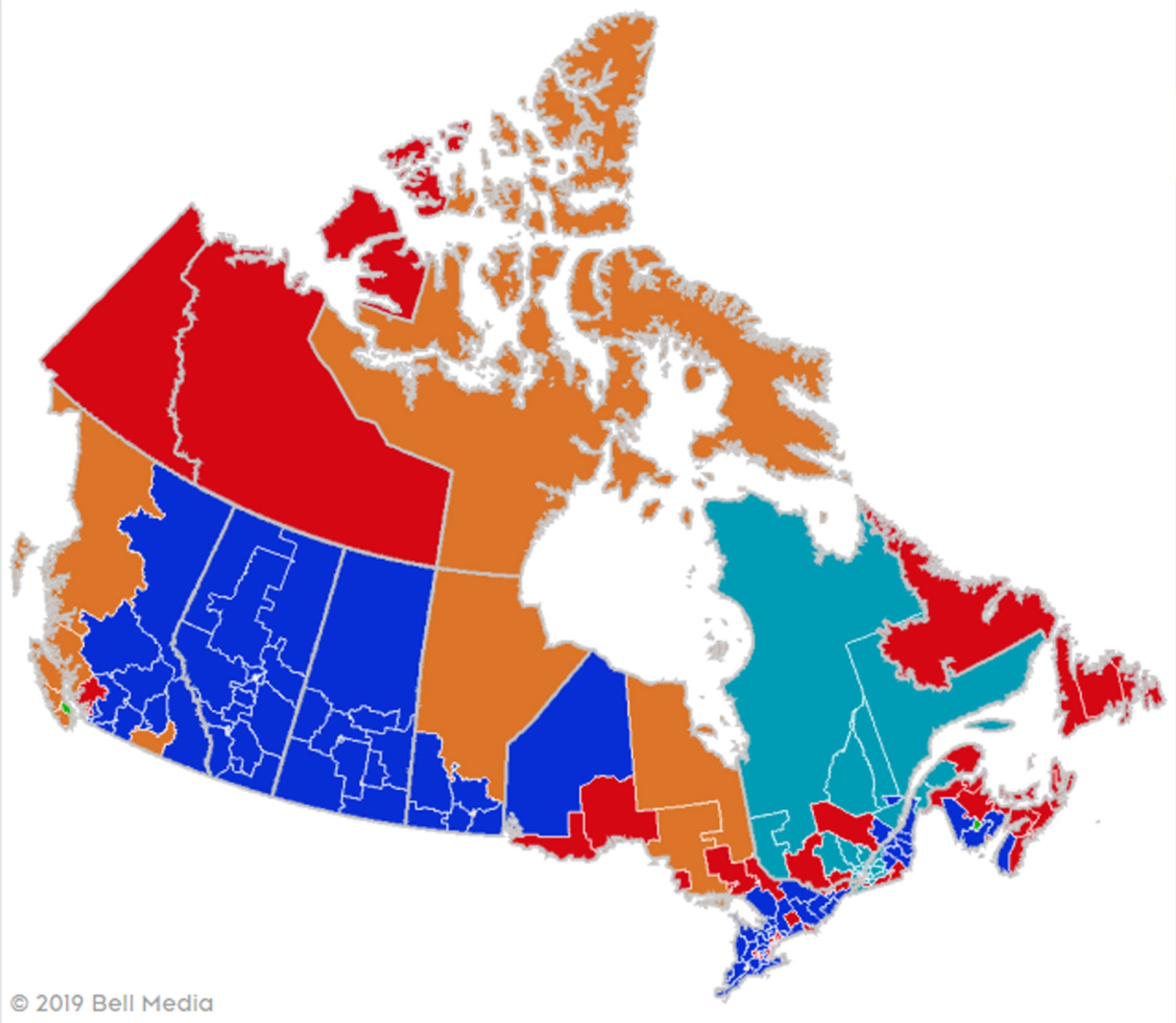 Still, Trudeau will need to navigate carefully following a result that represented an undeniable rebuke of his performance over the past four years, without altogether turfing him from power.

The Liberal seat result is well off the 184 the party won in 2015, when Trudeau swept to power with a majority government. The Liberals also won with the lowest share of the popular vote -- currently at 33 per cent -- for any governing party in the nation’s history, even trailing the rival opposition Conservative Party, which won about 34 per cent of ballots cast.

He’s also overseeing a more divided nation than the one he inherited. The results exposed a stark regional split. The Conservatives -- who have championed the oil sector -- finished second with 121 districts, much of it concentrated in four western provinces. The separatist Bloc Quebecois finished with 32 districts, more than triple their tally from 2015, and pledged to support any measure they see as in Quebec’s interest. The Liberals won only 17 seats west of Ontario.

There is also a deep fault line between rural Canada and the nation’s biggest cities. The Liberals relied heavily on big wins in Toronto and Montreal to stay in power, and are governing with hardly any districts outside of large cities and Atlantic Canada.

The outcome likely ensures the survival, for now, of a national carbon price, introduced by Trudeau and deeply unpopular in a number of provinces. The Conservative Party had campaigned against the tax, which also includes payments made to households as an offset.

It also may mean Trudeau will need to ramp up spending marginally more than promised. The Liberals pledged to increase the government deficit to $27.4 billion next year to fund new campaign promises, bringing it above 1 per cent of gross domestic product for the first time since 2012. That’s even before any new measures needed to accommodate requests from the NDP to win their support.

Singh, the NDP leader, has said he will lay out six requests in exchange for his support in any minority parliament: a universal pharmacare plan and national dental care, investments in affordable housing, waiving interest on student loans, a “bold” plan on climate change, a tax on wealth and a price cap on mobile phone bills. Singh told a crowd of cheering supporters near Vancouver that he’s already spoken to Trudeau; the crowd burst into chants of “tax the rich!” as Singh outlined his priorities.

The Liberal Party is already pledging about $10 billion in new annual spending by 2023 to finance a slew of new promises, including more generous child benefit payments and employment insurance, extra funding for post-secondary education, and an increase in the old age supplement for low-income pensioners. How do you feel about Canada’s economic outlook after the election?

Trudeau’s victory amounted to a rejection of Scheer, who failed to extend his party’s strength enough in the energy-rich prairies into breakthroughs in Ontario and Quebec, Canada’s two most populous provinces. Scheer campaigned on a small-government, pocketbook-issue platform akin to his predecessor, Stephen Harper, who governed Canada from 2006 to 2015.

Scheer likened his result to Harper’s first election in 2004, which the former Conservative leader lost, and indicated he planned to remain as leader and bide his time to replace Trudeau. “When the time comes, and who knows when that will be, Canadians will need us to replace the Trudeau Liberals,” he said.

Trudeau’s minority government is the fourth in Canada’s past six elections. Harper governed through two minorities before finally winning a majority. Trudeau’s father, former prime minister Pierre Trudeau, was cut down to a minority in his second mandate, before winning two more majorities over the course of his political career.