Prime Minister Justin Trudeau, fighting for his political life three weeks away from an election, is seeking a second mandate from voters to increase the nation’s debt to deliver tax cuts and spending.

In a costed platform released Sunday, the incumbent Liberals detailed a $57 billion plan over four years -- worth about half a percent of annual gross domestic product -- and pledged to pay for it with fresh borrowing, should they retain power.

The plan represents a doubling down by Trudeau on deficit spending his team says is needed to stoke growth and provide struggling households, many of them with high levels of personal debt, with help. The prime minister’s critics, however, say the Liberals have been spending too much in good times and aren’t setting enough fiscal ammunition aside for when a recession hits.

Under the Liberal plan, Canada’s deficit would peak at $27.4 billion next year, bringing it above one per cent of GDP for the first time since 2012, before dropping to $21 billion by 2023. That far exceeds the $14 billion deficit recorded in 2018. In total, the plan would add an additional $31.5 billion in deficits and bring the cumulative budget gap over the next four years to $93 billion.

Politically, the Liberals hope the higher deficits will give them a potential wedge issue in a campaign where the two major parties have rolled out similar policy objectives -– from tax cuts to helping first time home buyers and seniors. Conservative Leader Andrew Scheer has yet to release his full fiscal projection but has promised to eventually return the budget to balance, though only over five years.

In fact, given Scheer’s reluctance for a quick return to balance, both the Liberal and Conservative plans are poised to deliver a boost to the economy next year, no matter who wins. It’s perhaps even enough to prompt the Bank of Canada to reconsider cutting interest rates, according to Jean-Francois Perrault, chief economist at Bank of Nova Scotia in Toronto.

“It seems clear whoever is in power, you are looking at a bigger deficit than had there not been an election,” Perrault said in a telephone interview.

Opinion polls show the Liberals are running neck and neck with the Conservatives, despite Trudeau’s campaign being jolted by revelations he wore black and brownface makeup numerous times as a younger man. Seat projections tabulated by the Canadian Broadcasting Corp. show neither party holding enough support to win a majority. 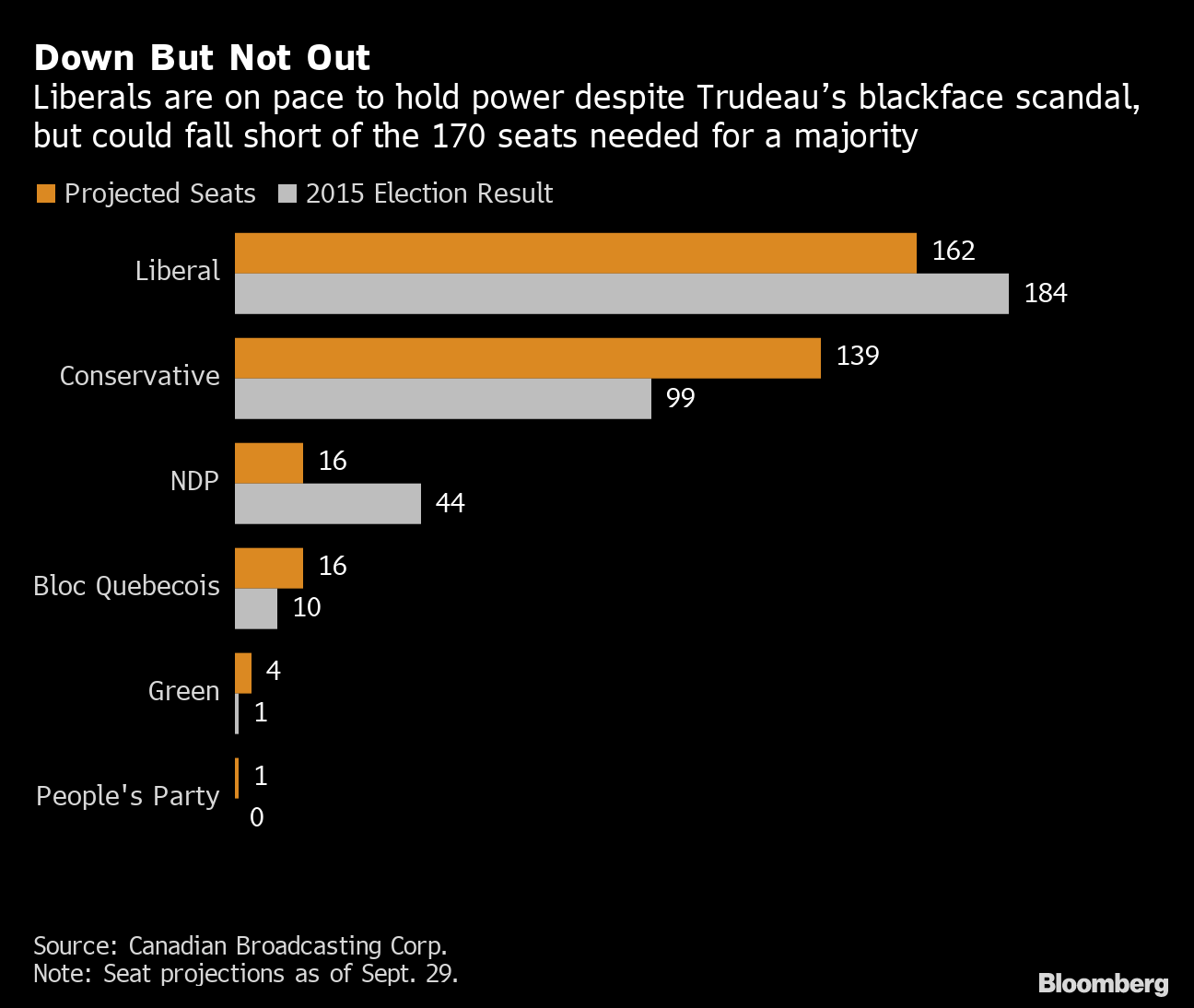 Deficits matter in Canada, with a collective aversion to debt that was cemented in the mid-1990s amid ratings agency downgrades, a falling currency and a national unity crisis. It remains an explosive issue, even though Trudeau’s deficits have hovered at less than 1% of GDP, far below many other western nations. The U.S. budget deficit is close to five per cent of GDP.

In the 2015 election campaign, Trudeau pledged to run deficits but for only three years and no more than a cumulative $25 billion. By 2019, Canada’s budget would be back in balance.

Since taking power however, his budget gaps have escalated and Trudeau has abandoned any willingness to balance the budget. In fact, he’s using his deficits as a lever to attack the opposition Conservatives, claiming they plan to bring austerity measures that will slow the economy and eliminate government services.

“I will let the Conservatives explain why cuts and austerity -- if they really think so -- are going to help Canadians,” Trudeau told reporters at a Toronto-area campaign stop Sunday.

Trudeau’s first three budgets were in the negative by a cumulative C$52 billion. His last budget in March projected a deficit for the current fiscal year of about $20 billion.

The Liberals would retain their existing fiscal anchor, which is to keep the nation’s debt as a share of GDP on a downward trajectory -- but just barely. The debt-to-GDP ratio would fall to 30.2 per cent by 2023, from 30.9 per cent last year. That’s well above the 28.6 per cent the government had projected in four years’ time in its last budget in March. They also pledged to preserve Canada’s AAA credit rating.

There are new revenue raising measures, totaling $25.4 billion over four years, in the Liberal platform.

The tax measures announced Sunday are short on details, but will be focused on corporations and wealthier Canadians, according to the documents. The Liberals believe they can raise an additional C$2 billion as early as next year by undertaking “a new comprehensive review of government spending and tax expenditures, to ensure that wealthy Canadians do not benefit from unfair tax breaks.”

They also expect to raise $1.7 billion in 2020 by cracking down on corporate tax loopholes that allow companies to deduct debt. Other new measures include a three per cent value-added-tax on digital companies with worldwide revenue of more than $1 billion. It would take effect April 1 and be expected to raise more than $500 million next year. The Liberals also plan to impose a 10 per cent luxury tax on cars and boats worth more than $100,000.

--With assistance from Erik Hertzberg, David Scanlan and Eric Lam.